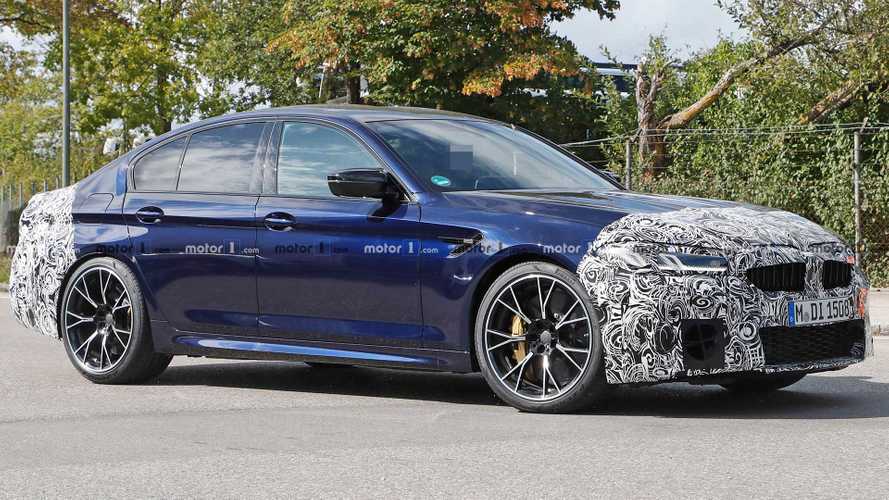 Also, see how the updated M5 looks next to the current one.

A new batch of spy shots catches BMW engineers developing three test vehicles of the M5's upcoming refresh. There are even great photos that put the revised model and current one next to each other.

The most obvious change at the front is the headlight redesign. On the refreshed M5, the bottom edge of the lamps is flat instead of having a slight divot near the grille. The change is subtle but gives the nose a sharper appearance. The LED running lights also have a different style by following the newly flat shape of the headlights.

Judging by the camouflage, it looks like the M5 is following BMW's new design scheme of enlarging the grille. While the exact changes aren't visible here, there appear to be styling changes to the lower fascia, too. The rear diffuser isn't visible on this machine, but don't expect the designers to remove the sporty element from the final production version.

The latest rumours suggest that the updated M5 retains a 4.4-litre twin-turbo V8. Major powertrain upgrades seem unlikely, but the engineers might be able to massage the engine for a slight increase in output.

A more tantalising rumour suggests that BMW is developing a new twin-turbo V8 for the M5, but it wouldn't be available until 2022 at the earliest. The mill's output allegedly tops the 617 bhp from the existing M5 Competition. The powerplant might use a level of electrification to improve efficiency.

A debut date for the refreshed M5 and rest of the 5 Series range is a mystery. There are no major European auto shows for the rest of the year, so we might not see this updated styling until 2020.