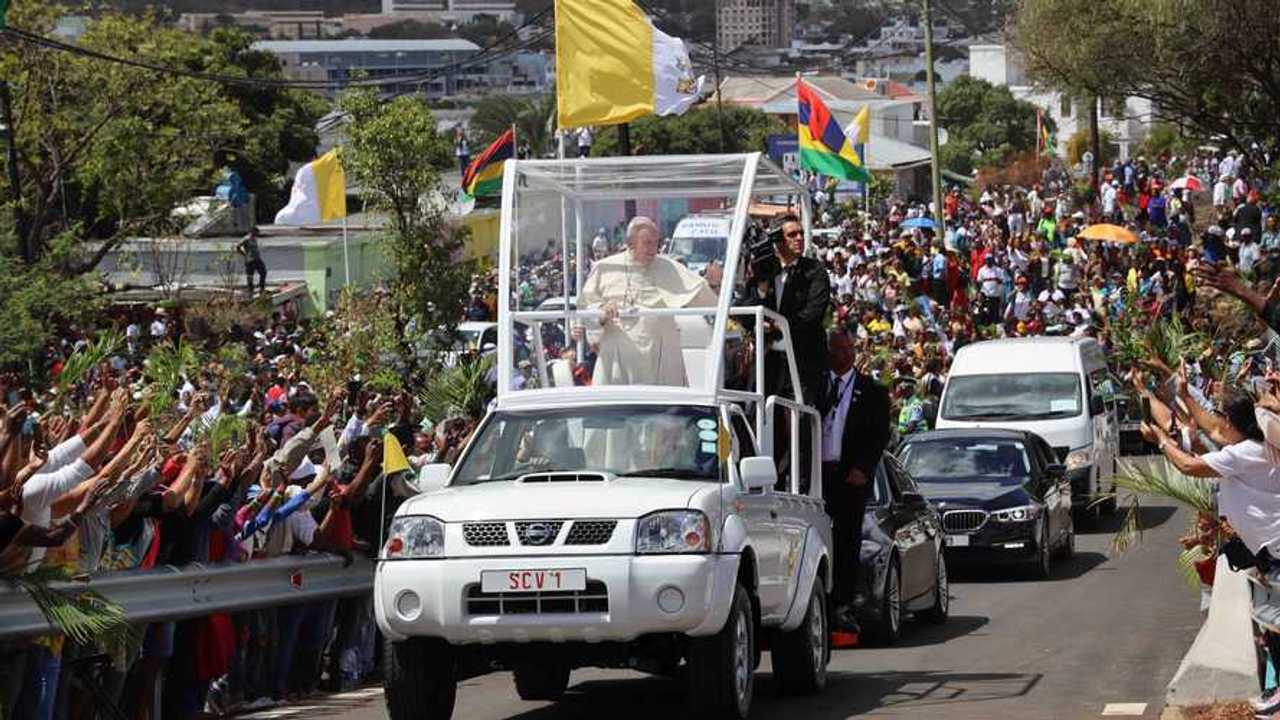 The pontiff rode in a special NP300 during his recent visit to the island of Mauritius.

A special vehicle for the pontiff has been a thing for decades, and some have been rather elegant. The Pope rode in a customised Lincoln Continental in the 1960s, had a slick Mercedes S-Class in the 1980s, and even had a special Mercedes M-Class a few years back. Now, the honour of building the latest in a very long line of Popemobiles falls to Nissan, a first for the Japanese automaker. And well, the final product is a special pickup truck.

Pope Francis to be presented with Senna sculpture

Actually, it’s not as strange as it sounds. When the Pope travels, special Popemobile conversions are often built on-site as opposed to transporting a car to different countries. During Pope Francis’ recent trip to Africa, he visited the island of Mauritius where a properly white Nissan NP300 with a large glass enclosure and seat in the bed was waiting. The upfit was performed by ABC Coachworks, a company on the island affiliated with ABC Motors, which is in turn affiliated with Nissan.

"ABC Automobile, as one big family, put all its heart into the design of a popemobile worthy of this name and of Vatican's standard," said ABC Automobile Managing Director Dean Ah-Chuen. "We were and still are amazed by the outcome of three months of pure hard work. We felt an immense sense of belonging and accomplishment when we watched His Holiness in this popemobile we made with our own hands. We are so proud for having contributed, in our own way, to the arrival of the pope."

It's good to be the boss:

You might better know the NP300 as the Navara here in the UK. It’s endured with just minor facelifts since 1997, and we suspect this could be one of the truck’s proudest moments. As such, with its mission now complete, the upfitted truck will be placed on display in Mauritius to commemorate the Pope’s visit.

ROSSLYN, Pretoria, South Africa – A Nissan NP300 Hardbody provided the basis for a unique "pope-mobile" for Pope Francis's final stop, the Indian Ocean island of Mauritius, on his three-country visit to Africa in September, 2019.

The Roman Catholic Church has been using specially built cars for the pontiff since 1965 when Pope Paul VI used one to greet the crowds in New York. Several manufacturers have had the honour of making vehicles over the years, but this was the first time the honour fell to Nissan and, more specifically, Nissan's Mauritian NSC ABC Motors.

ABC Motors supplied the Nissan NP300 Hardbody, which was then sent to its subsidiary company ABC Coachworks to be modified according to Vatican specifications. Overseen by the Diocese of Mauritius, the work was a first for the company that normally specialises in coach and bus building; the company also modifies vehicles for police, ambulance and fire-fighting specifications, as well manufacturing canopies for pickups.

"ABC Automobile, as one big family, put all its heart into the design of a pope-mobile worthy of this name and of Vatican's standard," said ABC Automobile managing director Dean Ah-Chuen. "We were and still are amazed by the outcome of three months of pure hard work. We felt an immense sense of belonging and accomplishment when we watched His Holiness in this pope-mobile we made with our own hands. We are so proud for having contributed, in our own way, to the arrival of the pope."

Jim Dando, Nissan Group of Africa's director of Sales and Operations, said the Vatican's decision to use the legendary Nissan Hardbody was a fantastic testament to the vehicle's enduring longevity and popularity across all African markets.

"I'm particularly pleased about the honour that was accorded ABC Motors," said Dando. "They have been the Nissan NSC on the island country for 34 years, and in the last 19 years they have been the market leader every year except for two. It's a remarkable achievement in any market, but particularly Mauritius because of the highly competitive environment there. Normally a market has a leader at around 30% market share with one to two rivals chasing them. In Mauritius, ABC leads perhaps the most competitive market in Africa, and that includes South Africa, with between 14 and 16% market share, which means that there are five competitors biting at their heels. Since their establishment in 1985, they've won a range of Nissan awards across the spectrum from sales to after sales and spare parts facilities – most notably the Nissan gold prize several times and the Nissan Global Award in 2005 and 2007. I'm surely they will treasure this accolade just as much."

ABC Motors is a subsidiary of ABC Group, which was founded in 1931 by Sir Jean Etienne Moilin Ah-Chuen. The group is one of the top 25 business conglomerates in Mauritius employing more than 1,400 people across five clusters: food distribution and manufacturing, automotive, banking, financial services and shipping & logistics. ABC Automobile is the group's flagship division, employing almost half the group's staff.

The Nissan NP 300 Hardbody, with its unique SCV1 number plates – an abbreviation of the Latin Status Civitatis Vaticanae (Vatican City State) – will be put on permanent display by the diocese as a memento of the pope's visit to the island.