Take a closer look at the intriguing Maybach Ultimate Luxury

Why buy a sedan and an SUV when you can have both in one car?

Mercedes will unveil a GLS-based Maybach SUV before the year’s end, but this isn’t it. What we have here is the oddly shaped Ultimate Luxury concept introduced back in April 2018 at the Beijing Motor Show. The peculiar showcar represents a marriage between an SUV and a saloon all wrapped up in an opulent package you either love or hate.

The three-pointed star has yet to approve a production version of the Vision Mercedes-Maybach Ultimate Luxury, but Steffen Köhl, Director Advanced Exterior Design at Mercedes, told Supercar Blondie that some design cues will be implemented in future models. After checking out the one-off Exelero, the YouTube star traveled to Frankfurt where Mercedes allowed her to check out the spectacular concept.

From the gargantuan 24-inch turbine-styled wheels and split front trunk to the rose gold accents and the fancy pop-out door handles, this isn’t your typical Mercedes SUV. Then there’s the unconventional shape and the lavish four-seater interior with all the luxury touches you could ever imagine. Billed as being the very first Sports Utility Limousine (SUL), the China-centric concept features a full-length centre console integrating a heated tray with a teapot and cups for the rear passengers. The tea set sits on a sculpted wooden tray made from ebony and becomes visible at the press of a button featuring Maybach’s double M logo, in rose gold, of course.

Unlike the forthcoming Mercedes-Maybach GLS with its conventional engines all the way up to a rumoured V12, the concept is purely electric. Four compact motors give it a combined output of 738 bhp sent to all four wheels to enable an electronically capped top speed of 155 mph. 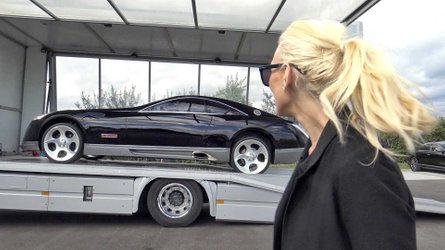 Maybach Exelero still looks special after all these years 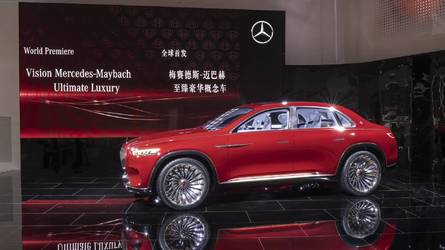 Mercedes says the necessary juice is provided by a floor-mounted battery with a capacity of 80 kWh, which gives it over 200 miles of range per EPA or more than 311 miles based on NEDC. In only five minutes, the battery can be charged to provide the luxobarge with approximately 62 miles of range.

Wondering about its size? It’s huge, stretching at 5260 millimeters long, 2110 mm wide, and 1764 mm tall. It probably has an imposing presence on the road, but we’ll likely never see it since the Vision Mercedes-Maybach Ultimate Luxury is officially only a concept.