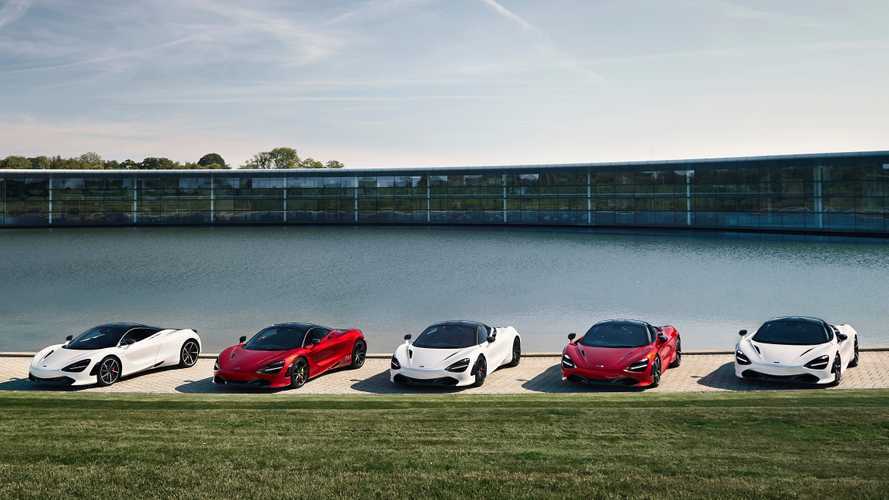 The Apex Collection models even come with free F1 experience.

McLaren has announced a limited run of 720S coupes to commemorate the brand's racing heritage – they're called the MSO Apex Collection and just 15 will be offered in one of five designs inspired by nations where McLaren has enjoyed racing success, each priced from £288,813.

The company was the first to introduce a carbon fibre monocoque in Formula 1 and that feature has since become a key part of every McLaren. The MSO Apex Collection cars have bespoke extended carbon fibre sills, each adorned with the apex speed of the fastest corner of the grand prix circuit of the country represented by that particular car.

Inside the pack adds lightweight carbon fibre racing seats with a titanium harness bar which can accommodate racing six-point harnesses for the driver and passenger.

"The McLaren story began on the racetrack and the circuits where we made our name," said Alex Long, managing director for Europe at McLaren Automotive. "The MSO Apex Collection celebrates the circuit prowess of our cars and the enduring link with countries that cherish McLaren’s racing heritage and help to drive our ongoing success with cars that are equally at home on track or road."

As well as owning a rare car inspired by McLaren's impressive racing heritage, by purchasing an Apex Collection car, you will also get a chance to join the McLaren F1 team at the track. Each owner will get an FIA Formula 1 Paddock Pass an will be able to participate in a Pirelli Hot Laps experience, where they'll get to experience a high-speed passenger ride around a Grand Prix circuit with a professional driver behind the wheel.

McLaren’s history was forged on the race circuits of Europe from the moment that founder Bruce McLaren began competing on the continent at the end of 1950s, through to modern-day GT racing.  Inspired by the brand’s formidable racing prowess – and named after arguably the most crucial aspect of successful cornering at high speeds – the MSO Apex Collection comprises just 15 McLaren 720S Coupés, showcasing five special designs celebrating nations associated with McLaren successes on the track.

The rigid and light carbon fibre chassis at the heart of every McLaren - introduced for the first time into Formula One in 1981 – is just one example of the brand’s evolution from racing to become the most pioneering sportscar and supercar company.

This connection is immediately evident to every Apex Collection owner upon opening the 720S’s dihedral door, which reveals MSO Bespoke extended side sills in carbon fibre, adorned with the apex speed of the fastest corner at the Collection’s Grand Prix circuit of that country.  Achieved in the car by one of McLaren’s professional performance drivers, the apex speed presents a challenge that each owner can take on by joining a Pure McLaren track driving event, where they will be coached by a McLaren professional performance driver to maximise their circuit driving potential.

Reinforcing the link to racing, every owner of a McLaren Apex collection 720S will also receive an FIA Formula 1 Paddock Pass. They will also be able to participate in the Pirelli Hot Laps experience; a high-speed passenger lap in a McLaren car with a McLaren professional driver at the wheel – where they will be able to see for themselves how the apex speed is achieved.

On- or off-track, the 720S Coupé is a game-changer in its own right, designed and developed from the outset to excel in all conditions. The lightweight but incredibly strong and stiff carbon fibre Monocage II body structure at its core combines with the acclaimed 720PS twin-turbocharged V8 engine and Proactive Chassis Control II active suspension to produce a car that delivers acceleration from standstill to 200km/h (124mph) in just 7.8 seconds.

The McLaren Telemetry (MTT) system that is also part of the Track Pack allows owners to analyse their circuit progress and improvement opportunities, recording driving performance using three integrated video and advanced data logging. Each Apex car also features a portfolio of MSO options, including Extended Shift Paddles; MSO Bespoke steering wheel with 12 o’clock marker in a dual colour band Alcantara® material or leather, and MSO Bespoke throttle pedal and key shell. An MSO Bespoke dedication plaque identifies the cars in the collection, which are also distinguished by an MSO Apex logo on the rear fender.

“The McLaren story began on the racetrack and the circuits where we made our name. The MSO Apex Collection celebrates the circuit prowess of our cars and the enduring link with countries that cherish McLaren’s racing heritage and help to drive our ongoing success with cars that are equally at home on track or road.”
Alex Long, Managing Director Europe, McLaren Automotive.

The 720S Coupé MSO Apex Collection is on sale now from £288,813 at selected European McLaren Retailers with customer deliveries beginning in October.

For more information on available driving packages, or to view the calendar, please visit https://cars.mclaren.com/gb-en/experiences