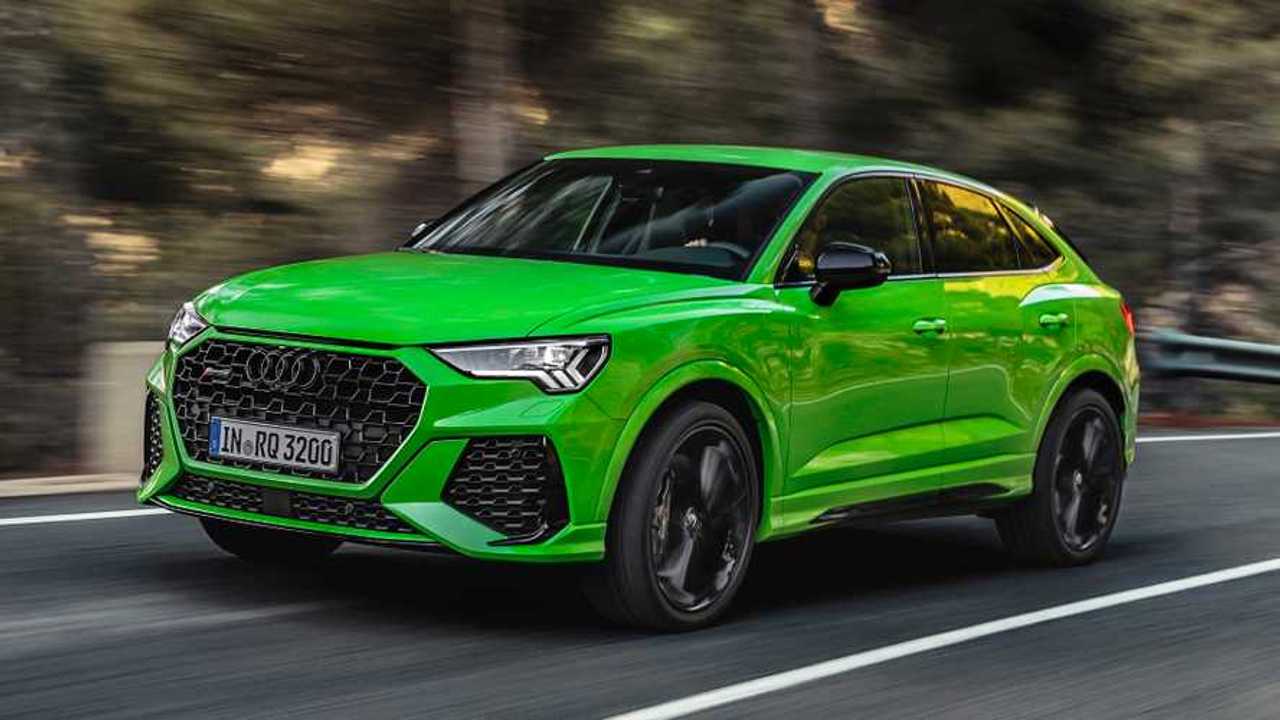 Audi overhauled its 2.5-litre turbocharged five-cylinder to be significantly lighter.

The Audi RS Q3 and RS Q3 Sportback debut as two flavours of performance crossovers for folks who want a hot hatch with a more rugged, higher riding appearance. The dynamic duo will be available to order in the UK in late autumn 2019.

Power for this pair comes from an updated version of Audi's 2.5-litre turbocharged five-cylinder. It now makes 394 bhp and 354 pound-feet of torque. This is enough to get the performance crossovers to 62 miles per hour in 4.5 seconds and to a standard top speed of 155 mph. As an option, customers can lift the max velocity to 174 mph.

The powerplant now has an aluminium crankcase, which saves 18 kilograms, and a hollow-drilled crankshaft cuts an additional kilogram. If buyers want a more aggressive sound, an RS Sport exhaust is optional and includes black tailpipe trim.

The power runs through a seven-speed gearbox to an all-wheel-drive system. The standard suspension layout sits 10 millimetres lower than the standard Q3 and Q3 Sportback. Dynamic Chassis Control adaptive dampers are an option for folks who want something more sophisticated. Six-piston brake calipers and steel rotors come from the factory, but customers can upgrade to ceramic discs with monoblock aluminium calipers.

The RS Q3 and RS Q3 Sportback are visually distinguished by a body-colour grille surround with gloss black mesh. A revised front fascia includes larger inlets in the corners and blade-shaped accents on each side. At the back, the models gain a gloss black roof spoiler, and there are a pair of large, oval-shaped exhaust pipes emerging from the bumper. Twenty-inch wheels come standard, but 21-inch pieces are also available.

The body comes in two exclusive colours: the very bright Kyalami Green and Nardo Grey. An optional package changes the exterior's gloss black accents to have an aluminium finish.

The interior features sport seats in a mix of black Nappa leather and Alcantara. If occupants want a pop of colour, there is available red or blue contrast stitching. For more visual distinction, design packages add red or blue accents to the steering wheel rim, seatbelts, doormats, and gear lever. An optional Virtual Cockpit Plus enlarges the digital instrument cluster display.

Ingolstadt, September 26, 2019 – The successor to the first, and currently only,  series production Audi SUV to have sported the emotive RS badge is waiting in the wings not only with a significantly more powerful version of the first generation car’s hallowed five-cylinder TFSI engine on board, but also with a new and highly appropriate Sportback body style option. The new 400PS RS Q3 and its even more curvaceous RS Q3 Sportback counterpart are set to become available in the UK in late autumn 2019 with a choice of ‘standard’, Audi Sport Edition and Vorsprung trim levels, and will be delivered to their first customers here towards the end of the year.

“The first Audi RS Q3 established its own segment. We aim to continue this success story with the new generation of the compact high-performance SUV,” says Oliver Hoffmann, Managing Director of Audi Sport GmbH. “With the offering of the all-new Audi RS Q3 Sportback, a progressive SUV coupe crossover, we are the trendsetter and are leveraging to the full the phenomenal growth potential for Audi Sport.”

Athletic: the exterior
The Audi RS Q3 and the Audi RS Q3 Sportback are synonymous with strength and outstanding performance - virtues that are also reflected in their design. The borderless Singleframe grille with its three-dimensional honeycomb structure in gloss black is inset deeper and directly into the RS bumper with its large side air inlets, and the striking boomerang-shaped blades in the bumper are designed exclusively for the RS Q3. The RS genes are also apparent in the flat slits above the Singleframe radiator grille.

With its sloping coupe-like roof line, the RS Q3 Sportback sits lower than the RS Q3, and its rising shoulder line is set further down than in its sister car, lowering the body’s optical centre of gravity. As such, the body appears even more muscular and the wheels larger. Both Audi Sport high-performance sports cars underscore their performance aspiration with pronounced wheel arches, which have been flared by 10 millimetres.

The rear view also signals power, particularly in the RS Q3 Sportback, which with its low rear window and roof edge spoiler in gloss black appears even wider than its sister model. The low-slung roof line and broad, sloping D-pillars also convey strength and dynamism. The new generation of the RS Q3 comes for the first time with a dual-branch RS exhaust system with large oval tailpipes on both sides and chrome-coloured trims. In the UK this exhaust system will sit in an RS-specific bumper with rear diffuser and horizontal blades in matt aluminium. A gloss black finish will also be available.

Depending on version, UK RS Q3 and RS Q3 Sportback models will be equipped with either LED headlights or Matrix LED headlights with dynamic indicators and RS-specific darkened trims. The rear lights also use LED technology.

Outstanding: the drive
The five-cylinder engine at the heart of the new RS Q3 models is a modern classic, and in its successive generations has been the recipient of the sought-after “International Engine of the Year Award” on an impressive nine consecutive occasions.

The performance figures for the compact and characterful five-cylinder unit are compelling: its 400PS power output represents a 17 per cent increase in power at an unchanged displacement of 2,480 cc. The engine’s maximum torque of 480 Nm (354.0 lb-ft)  is available over a very broad rev range between 1,950 and 5,850 rpm. The RS Q3 and RS Q3 Sportback sprint from zero to 62mph in just 4.5 seconds and can continue to a limited top speed of 155mph which can be increased as an option to 174mph.

At less than 50 centimetres in length, the 2.5 TFSI engine is extremely compact and is 26 kg lighter than the previous model. Its crankcase is made of aluminium, which alone saves 18 kg. In order to reduce internal friction and at the same time increase power output, the cylinder liners are plasma-coated and the crankshaft is hollow bored to reduce weight by a further 1kg. Its main bearings are also six millimetres smaller in diameter. The aluminium pistons have integrated channels for oil cooling. In the short warm-up phase after a cold start, the switchable water pump does not circulate the coolant in the cylinder head – the 2.5 TFSI engine thus reaches its operating temperature more quickly. This lowers the coefficient of friction and reduces fuel consumption.

1-2-4-5-3 – firing alternates between adjacent cylinders and those far apart from one another. The particular firing sequence and the odd number of cylinders make for a very special rhythm and unique engine sound. The dual-branch RS exhaust system underscores the characteristic sound of the five-cylinder firing sequence. The RS sport exhaust system with black tailpipe trims that will be a standard feature of Edition and Vorsprung variants accentuates the unmistakable sound even more.

The power from the five-cylinder engine flows via a seven-speed S tronic transmission to the quattro permanent all-wheel drive system that distributes the power as needed between the axles via a multi-plate clutch. The wheel‑selective torque control also contributes to the safe and agile handling.

The Audi drive select dynamic handling system influences the operating characteristics of the quattro system and other components such as steering, suspension, the S tronic transmission, engine response and sound. Depending on the selected equipment variant, there is a choice of five or six modes: comfort, auto, dynamic, efficiency and individual or, as an alternative to the individual mode, the two new RS modes RS1 and RS2. Via the MMI the driver can adjust and save the two RS modes individually. The new “RS MODE” steering wheel button provides rapid access to the two new modes and allows the driver to switch between modes.

Consistently sporty: the suspension
The standard RS sport suspension lowers the body by 10 millimetres compared with the Audi Q3 and Q3 Sportback and provides the two sport compacts with outstanding handling characteristics. The RS-tuned progressive steering also clearly conveys feedback from the road.

At the front axle with its MacPherson design featuring lower wishbones, the track width is 1,590 millimetres. In the rear, the four-link design provides a track width of 1,583 millimetres. Behind the standard 20-inch wheels the all-new six-piston RS steel brake system works with ventilated and perforated discs measuring 375 millimetres (front) and 310 millimetres (rear, not perforated). Their callipers are painted black as standard and are available in red as an option.

Vorsprung versions of the new RS Q3 and RS Q3 Sportback are equipped with the RS sport suspension plus with Dynamic Chassis Control (DCC), the operating parameters of which are adjustable via the Audi drive select system. Here an electrically actuated proportional valve regulates the flow of oil into the damper pistons. Sensors measure movements of the vehicle body, and the RS-tuned dampers are then adjusted accordingly based on the road surface conditions and driving situation. The suspension provides the optimum damping force for each damper within milliseconds – low for hard bumps; high to brace the body during fast cornering or when braking. The upshot is enhanced driving dynamics, precise stability and agile handling coupled with even greater comfort.

Driver-oriented: the interior
The focus on performance and uncompromising driver reward conveyed by the exterior styling of the new RS Q3 models is also carried through into their interiors. The air-conditioning control unit, the centre console and the MMI touch display are tilted towards the driver by ten degrees – the entire cockpit is very much designed with the driver in mind.

The architecture of the instrument panel with the fully digital, RS-specific Audi virtual cockpit plus that is standard for all UK models harmonises perfectly with the display for the MMI touch operating concept with its unobtrusive high-gloss black surround. The virtual cockpit plus incorporates a shift light display that prompts the driver to upshift when the maximum engine speed is reached, and also special RS displays providing information on tyre pressure, torque, power output, lap times, g-forces and acceleration measurements.

Generous: space concept and equipment
The new RS Q3 and RS Q3 Sportback are designed as fully fledged five-seater models offering impressive versatility. The rear seats can be moved fore-aft as standard by 150 millimetres in the RS Q3 or 130 millimetres in the RS Q3 Sportback; their three-way split backrests can be tilted in seven stages. The luggage compartment holds 530 litres - with the backrests folded down the figure rises to 1,525 litres (Sportback: 1,400 litres).

Eight paint colours are available for the new RS Q3 and RS Q3 Sportback, including the RS-specific colours Kyalami green and Nardo grey. Customised paint finishes are available from Audi exclusive. Depending on model, aluminium-look or gloss black styling packages complement the paint palette, adding contrast to fitments such as the window trims, roof rails (RS Q3 only), rear diffuser and side sill inserts. Where the gloss black styling package is applied, the Audi rings and the RS logos are also finished in black in the front and rear.