That's 0.2s quicker than the official number provided by Audi.

It’s a known fact that German automakers are being overly cautious when it comes to publishing performance numbers of their vehicles, and Audi is no exception. Case in point, the official press release for the new RS7 might say the gorgeous Sportback needs 3.6 seconds for the 0-62 mph sprint, but Audi’s own Virtual Cockpit shows a 3.4s time in a real-life test conducted in southern Germany.

According to Motor1.com long-time collaborator Auditography, this lovely Glacier White example actually had a Vbox mounted inside to accurately grab all the juicy performance numbers. It completed the sprint in 3.4 seconds “pretty much anytime, anyplace” with the launch control turned on. Interestingly, the best run was clocked in at only 3.38s, making it comparable to the old R8 V10 Plus. The journey from a standstill to 124 mph took 11.9 seconds or a tenth of a second less than Audi’s numbers.

With a second person inside the cabin and a fully loaded boot, it did the quarter-mile in 11.8 seconds, so taking out the passenger and the luggage could bring it closer to the 11-second mark. That’s not too shabby taking into account the RS7 Sportback is far from being the lightest car out there, tipping the scales at a hefty 2,065 kilograms without a driver.

Speaking of weight, Auditography says the RS7 doesn’t really feel like the heavy car that it is, thanks to four-wheel steering and the trick new adaptive air suspension setup. Add into the mix R8-quick gear changes and sharp handling, Audi’s biggest Sportback is shaping up to be quite nimble for its class. However, it’s not perfect as stricter emissions regulations in Europe have forced the Four Rings to install a petrol particulate filter, muting some of the sweet engine noise in the process as the new one is not as loud as its predecessor. In neutral, the rev limiter kicks in at only 3,000 rpm.

Bear in mind the folks from Ingolstadt are just getting started with the RS7 as a hotter version could get a hybrid setup with more power (and probably weight) to serve as a direct replacement of the old RS7 Performance. The mechanically related RS6 super estate might be electrified as well with the twin-turbo 4.0-litre V8 working with an electric motor to churn well over the standard 591 bhp.

All about the RS7: 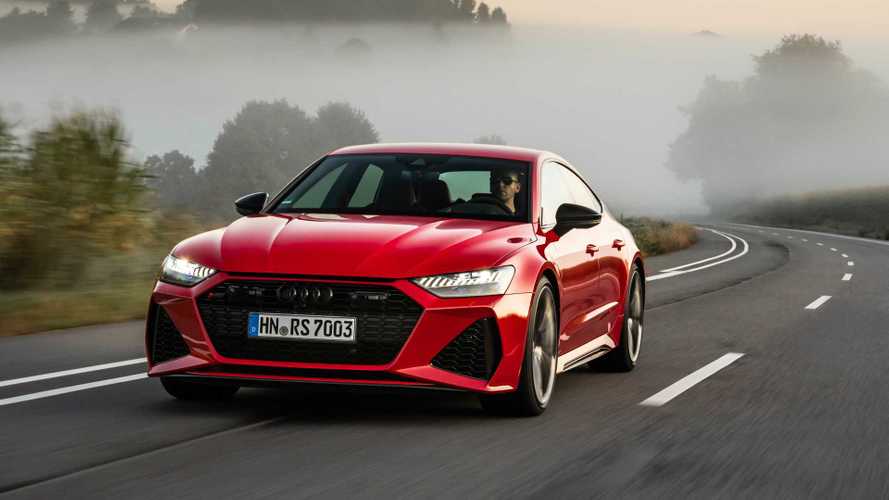