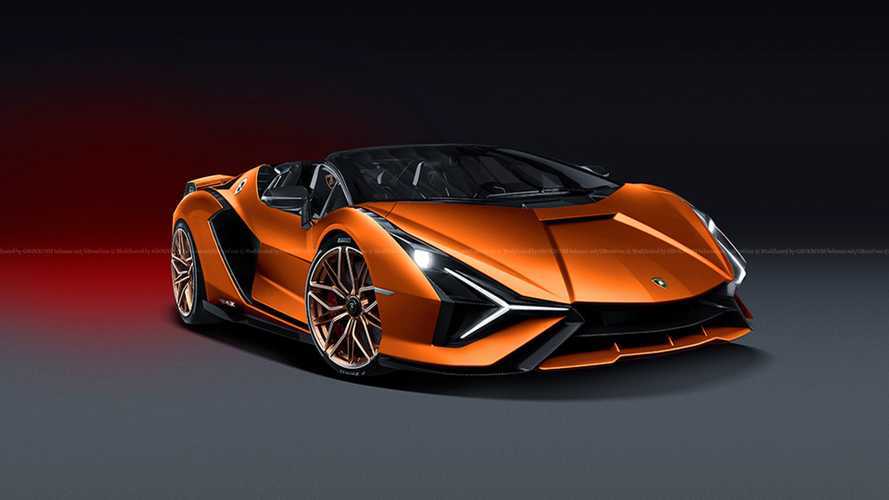 Cutting the roof off a high-powered hybrid might not be the best idea, but it looks good.

There’s no stopping the electric march in the automotive world. Lamborghini entered the fray just a few days ago with its stunning Sian hybrid, which also happens to be the most powerful road-going Lambo ever. With the aged Aventador’s V12 heart beneath that edgy bodywork, its electrically-infused powertrain generates 819 bhp for all four wheels to try and corral. Only 63 will be built – all of them hardtops – and each is already sold.

The Sian is here:

That hasn’t dissuaded Aksyononv Nikita at Bēhance.net from creating a cool series of what-if renderings depicting a roadster version. It’s not a bad look for the hypercar, especially when you realize the arched roof is one of the few spots on the Sian where you’ll find a curve. With that out of the equation, a theoretical Sian roadster looks even edgier. The upturned side glass with Miura-inspired vents at the top of the doors seems tailor-made for a roofless version, though such a build from Lamborghini is highly unlikely. Or is it?

As previously mentioned, the automaker will only create 63 Sians and pricing starts at an eye-watering £3 million. That figure didn’t deter buyers since each one is already sold, which certainly leaves a door open if Lambo executives want to squeeze a bit more cash from the Sian. Offering an additional build for roadsters wouldn’t affect the exclusivity or upset the production run of the 63 hardtops already confirmed. And if the first run sold out so quickly, we have to believe there are buyers ready to step up for another shot.

Of course, removing a car’s roof isn’t the best when it comes to structural rigidity. It’s one thing when the car in question has only around 400 bhp, but when you’re talking 819 ponies with the right now torque of an electric motor, altering the structure even slightly could have dire consequences. In that regard, it might not be a lack of buyers killing a Sian Roadster, but the laws of physics.