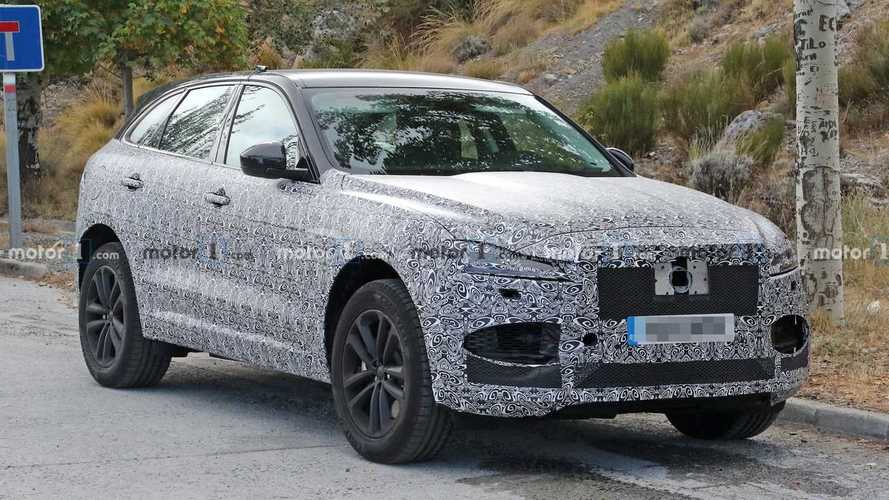 Jaguar's lineup is evolving. Not only is there an all-new XJ saloon on the way, as well as a facelifted F-Type sports car, but new spy shots suggest the F-Pace SUV is getting a makeover, too. This is our first look at the facelifted F-Pace in the wild. Though the camouflage keeps many of its final cues undercover, there are some interesting details to point out.

The first thing we notice is the headlights. On this prototype, the headlight housings appear to be smaller and more sculpted than the current production units. Rather than extending out near the front wheels, as the current F-Pace headlights do, this new design keeps them higher and tighter. It's hard to tell if the grille is any different based on these images, or if there are any updates to the lower vents and running lights.

Facelifted Jaguar F-Type spied on video screaming at the Nürburgring

Jaguar to use BMW’s front-wheel-drive platform for two small SUVs?

The back angle isn't any more revealing. Camouflage covers up any updated cues. But the limited look we do have at the taillights previews a new light fixture; there's a larger white area (possibly with a smoked element) above the red housing. It also looks like these lights don't extend as far out on the bumper as the current ones do.

That's about all we know about the updated F-Pace thus far. These images don't show much, and we don't know what Jag is planning as far as powertrains. The company says all of its models moving forward will feature some form of electrification, but it's unclear if that includes the facelifted F-Pace.

In theory, the updated F-Pace SUV could use Jaguar Land Rover's new hybridised Ingenium 3.0-litre inline-six. The rest of the engines in the lineup, meanwhile, should get modest power improvements. But we won't know all the details until the new F-Pace shows up officially, likely sometime in 2020.