Hyundai 45 Concept draws inspiration from past, looks into future 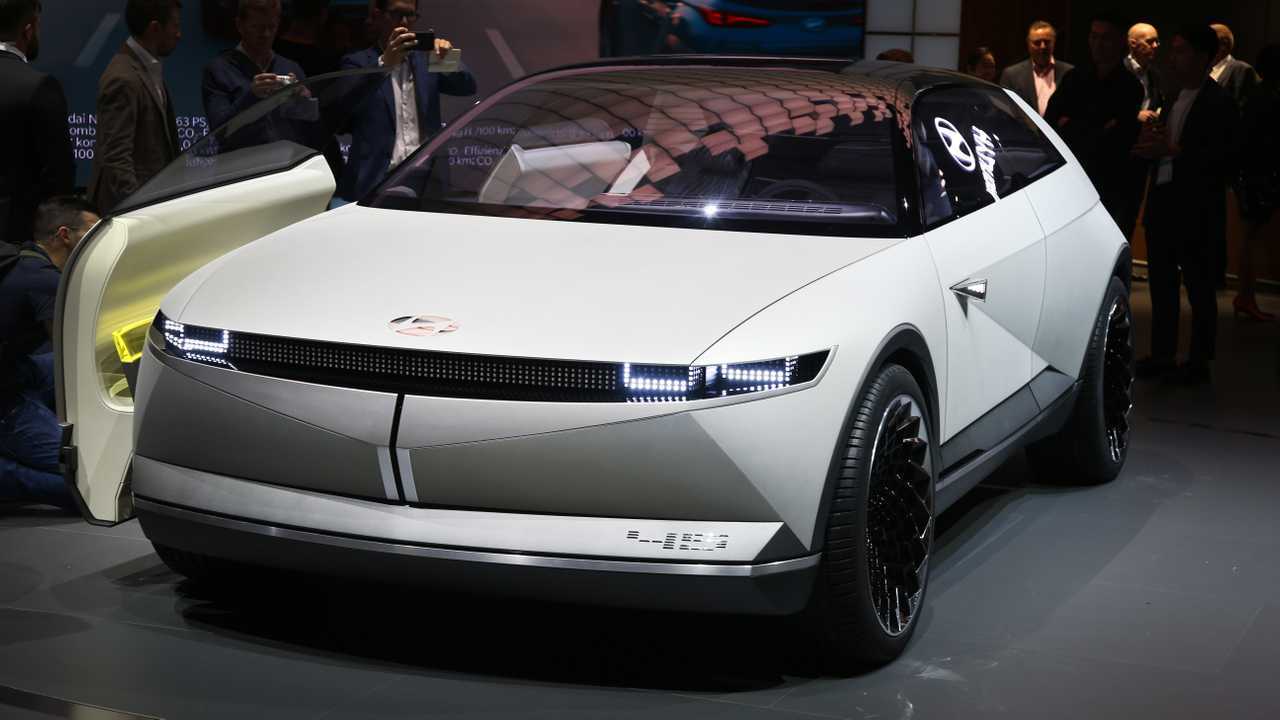 When Hyundai teased its new electric concept back in August, we had the feeling it’s going to be a pretty special study. It turns out, our assumptions were correct as the brand’s new 45 concept is a rather interesting and good-looking prototype. Not only that but it also serves a very important role for the company, previewing the future design direction of its production EVs. But we’ll get to that later.

The somewhat weird name of the concept actually has a pretty simple explanation – the study takes a look at Hyundai’s past, where exactly 45 years ago it presented the Pony Coupe Concept. The connection between the two is probably most visible at the front where the 45 concept reinterprets its predecessor’s distinctive lattice radiator grille with what Hyundai describes as “kinetic cube lamp” design.

The name 45 also stands for one more thing – the 45-degree angles at the front and rear, forming “a diamond-shaped silhouette that further foreshadows the design direction of future EV models.” The South Korean manufacturer also says “the iconic character” of the study is defined by its “monocoque-style body, aerodynamic and light-weight design inspired by aircrafts from the 1920s.”

As mentioned above, with the new concept, Hyundai is previewing the design of its future production electric models and is also highlighting future technological developments that “may influence” forthcoming production vehicles.

These include the so-called Camera Monitoring System – basically, a system that replaces the side mirrors with small cameras and tries to overcome visibility challenges caused by dirt gathering on the mirror by using an embedded turntable module, which rotates the lens past a brush.

While the exterior is minimalist and retro-styled, the cabin is an entirely different world. The interior embodies Hyundai’s Style Set Free strategy, which allows for personalisation, and is said to be inspired by the world of furniture design. Being an autonomous concept means the front seats can rotate to face other passengers. The infotainment system features a projection-beam interface, which replaces the central touchscreen display with a number of smaller displays integrated into the dashboard.

As an homage to its heritage and reimagined for the future, 45 foreshadows a new era of Hyundai’s automotive design focused on electrification, autonomous technologies and intelligent design. The progressive 45 puts a twist on a 45-year-old icon, the Hyundai Pony Coupe Concept, to introduce an entirely new in-car experience for self-driving vehicles of tomorrow.

Taking a look to the past is essential for moving forward, and the dramatic exterior styling of 45 excites the imagination and draws inspiration from the vehicle that first established Hyundai’s design DNA, the 1974 Pony Coupe Concept. The iconic character of 45 is defined by its monocoque-style body, aerodynamic and light-weight design inspired by aircrafts from the 1920s. The car’s name also owes itself in part to the 45-degree angles at the front and rear, forming a diamond-shaped silhouette that further foreshadows the design direction of future EV models.

The new concept strips away complexity, celebrating the clean lines and minimalistic structure of the original coupe concept. Combining heritage with vision, 45 incorporates the evolution of Hyundai’s ‘Sensuous Sportiness’ design language. 'Sensuous' stands for enhanced emotional values that customers can experience through design, and 'Sportiness' is determined to implement those values through innovative mobility solutions.

45 reinterprets the concept’s distinctive lattice radiator grille with a ‘kinetic cube lamp’ design. The iconic front-end presence with the kinetic cube lamps evokes analogue emotions, while at the same time applying cutting-edge technologies. It also takes Hyundai’s lighting architecture to the next level, allowing people to instantly recognize the vehicle at a distance.

By exhibiting a modernized fastback profile, 45 epitomizes stability and dynamism, characteristics accentuated by the vehicle’s significant width and forward-oriented posture. The precise, yet energetic factors of the exterior are delivered throughout the cabin, which is structured by a dynamic daylight opening (DLO). The DLO terminates in the fast angle of the C-pillar, which generates a feeling of dynamic forward motion, even when standing still.

As a progressive EV, new technology is visible in 45’s design. At the bottom of the door, a special garnish highlights its long-distance battery capability and, through active LED lights, drivers can intuitively know how much longer they can drive even before they get in the car. These thoughtful elements are designed for a user who is experiencing an EV for the first time.

45 also highlights future technological developments that may influence forthcoming Hyundai models, such as a hidden Camera Monitoring System (CMS) that is equipped in the vehicle, leaving room for self-driving system applications, and other upcoming technologies to emphasize Hyundai’s open architecture for the future. The system utilizes side cameras instead of traditional wing mirrors to overcome visibility challenges caused by dirt gathering on the mirror offering progressively less visibility. 45 overcomes this challenge by using an embedded turntable module, which rotates the lens past a brush to ensure perfect visibility at all times.

Inside – Covers all aspects of a consumer's lifestyle

The 45 embodies Hyundai’s ‘STYLE SET FREE’ strategy for future mobility that emphasizes personalization of design and function. As the new era of future mobility opens, Hyundai reimagines the in-car experience in a self-driven vehicle. The interior becomes a unique living space capable of transforming to accommodate a range of passenger lifestyle demands.

Inside, Hyundai’s design team takes the space beyond driving to focus on the vehicle’s evolution into a living space. Inspired by furniture designs, the minimalist cabin is fitted with an inviting fusion of wood, fabric and leather, creating a warm atmosphere that is both relaxing and spacious. Daylight was also considered as a design element for the headlining to bring analogue emotions in a natural way.

For occupants, the car delivers a comfortable and communal environment, with lounge chair-style rear seats and front seats that can rotate to face other passengers. Pushing design and technology further ahead, front-seat passengers can interact with the infotainment system via a projection-beam interface. This replaces a single central touchscreen with a series of displays and functions integrated into the dashboard itself.

The fully-electric powertrain finally enables a complete reimagination of how cars are packaged. The space is fully maximized with batteries and motors positioned outside or below the passenger compartment.

The batteries in 45 are set throughout the car’s ‘skateboard floor,’ contributing to its spacious interior. The model’s flat floor where the batteries are stored is nicknamed the ‘skateboard’ as it allows Hyundai to create a space that feels like a living room with new pieces of furniture. The floor is covered by a comfortable carpet, to further give off the sense of a living space, as well as reduce road noise. The seats swivel towards occupants as they open the door for convenient entry and exit.

Clean lines, ergonomic placement of controls and a ‘high-end electronics’ feel for the interior fixtures further enhance the feeling of space while reinforcing the simplistic modernity of 45’s design. The car reimagines storage space in a range of novel ways, including refining the concept of door-mounted device pockets by introducing a horizontally elongated shape that allows books or tablet PCs to be stored. Furthermore, the storage space uses a transparent material, so it is easy to see the content.