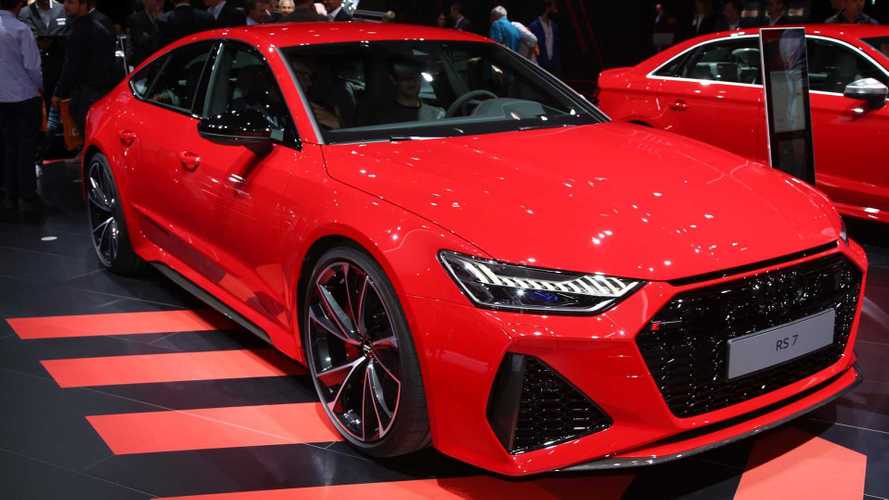 Ahead of the opening of the Frankfurt Motor Show, Audi today debuted its hot new RS7 Sportback. With a whopping 591 bhp and 590 pound-feet of torque, it's the most-powerful, standard RS7 Sportback to date… until the inevitable Performance package arrives. Here's what's new.

Power comes from a twin-turbocharged, hybridised 4.0-litre V8. The 48-volt electrical system on the new RS7 Sportback is the same one you'll find on its sibling, the RS6 Avant. Here it produces significant oomph, giving the RS7 a seriously quick 62 mile-per-hour sprint of 3.6 seconds and an electronically limited top speed of 155 mph. With the Dynamic and Dynamic Plus packages, though, that top speed figure increases to 174 mph and 189.5 mph, respectively.

Like the RS6 Avant, the RS7 employs a standard adaptive air suspension. In its standard setting, the RS7 sits 20 millimetres lower than the traditional A7. At speeds of 74.6 mph, it drops another 10 mm to improve airflow over the body. And with the ability to raise the RS7 with a special "lift mode," which adds up to 20 mm to the overall ride height, it means no more scraping the nose on steep slopes.

With the optional RS Sport suspension and Dynamic Ride Control, the RS7 Sportback is even more agile. The advanced suspension setup reduces pitch and body roll (though, Audi doesn't say by how much) thanks to new dampers sporting integrated valves, and more aggressive drive settings – including RS-specific RS1 and RS2 drive modes.

But that impressive power and agility come second, arguably, to the RS7 Sportback's drop-dead gorgeous styling. Both inside and out. The massive blacked-out grille, borrowed from other RS models, carries over. Here it's flanked by two triangular vents on either side, and a smaller vent just above it that funnels air directly under the bonnet. A set of 10-spoke, 21-inch wheels come standard (wrapped in 275/35 tyres), but buyers can option larger 22-inch RS wheels with sticker tyres (285/30) and even RS carbon-ceramic brakes which drop 34 kilograms from their steel counterparts.

Inside, the RS7 adopts Audi's MMI dual touchscreen interface and virtual cockpit, while RS logos and high-quality Nappa leather litters the cabin. The flat-bottomed, fully perforated wheel is unique to the RS7, as are the Nappa leather black RS sport bucket seats.

The Audi RS7 comes in 13 different exterior colours, including two specific RS shades: Nardo grey and Sebring black. The Audi RS7 will be available to order in the UK from November with first deliveries in January 2020. No word on pricing yet.