2021 Hyundai Tucson rendered based on spy shots has funky face 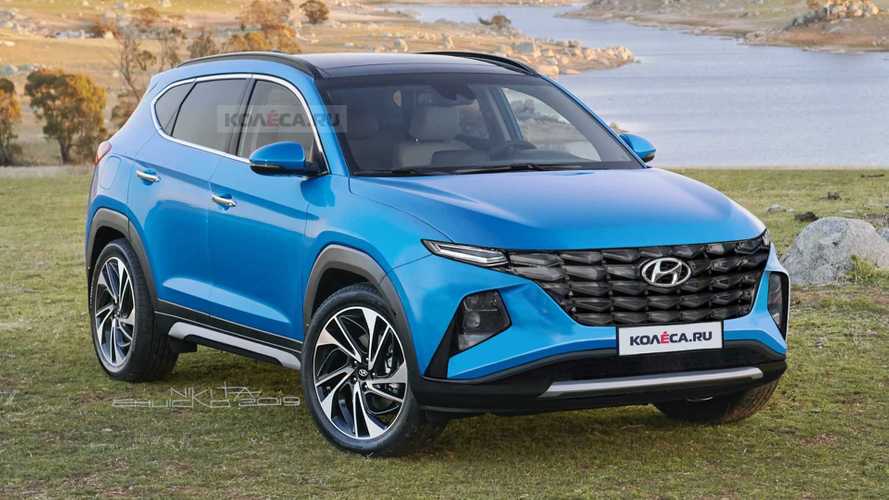 The compact crossover will be going through some major styling changes.

After expanding its SUV portfolio at both ends with the tiny Venue and the not-so-tiny Palisade, Hyundai is now working on a refresh for a long-running existing nameplate. Set to enter its fourth generation in roughly two years from now, the Tucson has already been caught by our spies on a couple of occasions courtesy of heavily camouflaged prototypes.

Our friends at Kolesa.ru have now decided to digitally alter those images and take off the disguise in an attempt to see into the design future of the revamped Tucson. With just about all of the other Hyundai SUVs featuring an unconventional exterior design language, it makes sense the company’s compact offering will be going down the same road. These renderings are based on the latest spy images and attempt to predict the massive styling changes for one of Hyundai’s most important models in terms of sales.

The two-tier headlight arrangement with slim upper clusters seen on the company’s other SUVs will be adopted by the next-gen Tucson to make it stand out in an overcrowded segment. The massive grille with an intricate pattern in the same vein as last year’s Grandmaster concept has been integrated into the rendering and is in line with what the prototypes have been showing.

The back of the new Tucson remains pretty much a mystery at this point since the test vehicles spotted at work had a significant amount of disguise to conceal the styling. Kolesa.ru went the extra mile and rendered the crossover’s derrière with a slightly sleeker look, but we’ll reserve our judgment for the moment when prototypes will be caught carrying less camo at the back.

Hyundai through the voice of its vice president of styling has already promised a design that will “freak out” people, so it’s safe to say the 2021 Tucson won’t be yet another traditionally styled crossover. Not only that, but it will have what it takes to stand out in Hyundai’s own high-riding lineup, meaning it won’t be a bigger Kona or a smaller Palisade as the South Korean company wants to give the Tucson its own identity.

There’s still a long way to go considering Hyundai recently launched a Tucson N Line in Europe based on the current generation of its popular compact crossover.