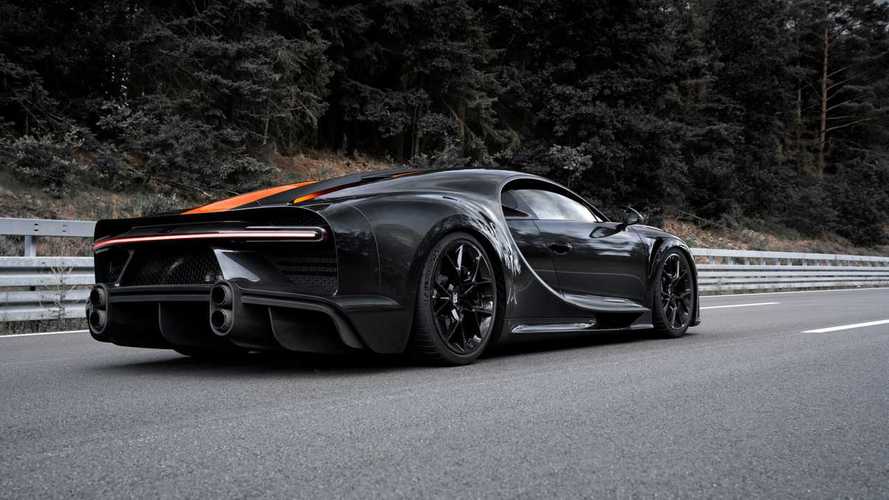 Unless you’ve been living under a rock for the past few days, you probably know that Bugatti made history earlier this week when it published footage of a top speed run with a longtail Chiron doing 304.77 mph. After announcing plans to stop chasing speed records and after explaining why the W16 hypercar only did the run in one direction at the Ehra-Lessien test track, Bugatti has now issued another press release.

This time around, the Molsheim-based marque explains the longtail Chiron has what it takes to reach even higher speeds, but unlocking those extra mph also depends on the location. Bugatti decided to go with Ehra-Lessien because they believe it’s the safest location in the world to conduct such top speed runs thanks to the 21-kilometre (13-mile) track with its three lanes, crash barriers, and rescue services at north and south ends. Before each test, the carriageway is cleaned by using special mats.

There is one important drawback, however. The German track in Lower Saxony is located just 50 meters above sea level. By comparison, the stretch of highway in Nevada where the Koenigsegg Agera RS set several records is about 1,036 metres above the sea level. As Bugatti points out, the higher the track is located, the lower the aerodynamic drag is since the air pressure and air density decrease the higher you go.

Bugatti has done the math and they believe the longtail monster would’ve been 15.5 mph faster had its top speed been tested on the Nevada State Road 160, according to head of development Stefan Ellrott. In other words, the modified Chiron could’ve broken the 500-kph barrier by doing 515 kph (320 mph) or considerably more than the 277.87 mph achieved by the Swedish hypercar nearly two years ago.

Here’s the excerpt from the press release:

“’Our calculations have shown that we would have been around 25 km/h faster in Nevada,’ says Stefan Ellrott. But Bugatti decided against this option nonetheless. ‘Safety comes first at Bugatti. The route in Nevada is very long and only goes in one direction: security forces would have taken too long to get to the scene in an emergency. In addition, the track has a slight gradient of about three percent. It wouldn't have felt right to set a record there.’”

If Bugatti does plan to come out with a production version – and we think they will – we’re hoping one owner will take the car to Nevada to test its real top speed. In an ideal scenario, the Chiron Super Sport would be in the hands of a professional racing driver able to fully take advantage of the hypercar’s insane performance.

The latest Bugatti is jaw-dropping:

Record attempts depend not just on performance but on location, too

Bugatti was the first manufacturer ever to break the 300-mile-per hour barrier with a pre-production vehicle of a new Chiron1 derivative. Achieving a speed of 304.773 mph (490.484 km/h), it was test driver Andy Wallace who secured a place for himself in the record books.

“With this record, Bugatti has once again shown what we are capable of – despite the enormous hurdles,” says Stephan Winkelmann, President of Bugatti. “After all, we’re not just the first manufacturer to produce a car that goes faster than 300 miles per hour – at 304.773 mph (490.484 km/h). We also did this on a test track that has a major drawback when it comes to speed tests.”

There are four crucial factors when it comes to making a record attempt: the vehicle, the track, the location and the weather. “All four have to be right and perfectly prepared so that everything is coordinated. The only thing we can’t influence is the weather,” says Stefan Ellrott, Head of Development at Bugatti.

With so much power, maximum safety must be ensured. The Ehra-Lessien high-speed track in Lower Saxony is the only place in the world where such high safety standards are applied to record attempts. The 21-kilometre three-lane high-speed track is lined with crash barriers, and rescue services are available at the north and south ends. Special mats are used to clean the carriageway before each test. “Safety is our top priority. We did everything we could in advance to minimise the risk to our test driver,” says Stefan Ellrott.

But Bugatti had to accept one major drawback: the test track in Ehra-Lessien is 50 metres above sea level. Unlike higher-altitude locations used for high-speed runs in the pastsuch as in Nevada, the higher air density of 1013.25 hPa is almost the same as at sea level.

The higher the track, the lower the aerodynamic drag

As the distance from sea level increases, the air becomes thinner and the number of molecules in the air per unit volume decreases. The reason for this is the air pressure gradient in the atmosphere, because the upper air layer masses act on the lower air layer masses. The molecules of the lower air are compressed more than in the higher-altitude air, so the pressure is higher. The air pressure drops by about 1 hPa every 8 metres: at 1,000 metres it is only about 88 percent of what it is at sea level, approx. 890 hPa. An exact mathematical description of the pressure curve is not possible, however, due to weather dynamics and other factors.

As air pressure and air density decrease, so does aerodynamic drag. Objects such as cars, airships or aircraft require less power. At an altitude of 5,000 metres, the density drops by about half, thereby halving the drag. To put it simply, the car has to apply more force at sea level to drive through the air than if it were travelling at an altitude of around 1,000 metres.

This direct correlation between air density and resistance results from the relationship between the drag coefficient – i.e. the drag reduced along with dynamic pressure – and the Reynolds number. This Reynolds number, which represents the ratio between inertial and frictional forces, characterises the flow field and thus also the force field acting on the vehicle. If the Reynolds number is very high, the drag coefficient does not change. As a result of the change in air density with altitude, the Reynolds number decreases almost proportionally to density. This means that since the density at an altitude of 1,000 metres has decreased by about 10 percent as compared to sea level, the Reynolds number is also subject to a 10 percent reduction. “However, this reduced Reynolds number is still so high that the drag coefficient does not change compared to what it is at sea level. Since the dynamic pressure is again proportional to density, the drag force at an altitude of 1,000 metres is about 10 percent lower than at sea level,” says Professor Dr. Wolfgang Schröder, Head of the Institute of Aerodynamics at RWTH Aachen University. At a speed of around 300 mph or 500 km/h, the Reynolds number increases in linear fashion with speed; in the case of an increase from 400 km/h to 500 km/h it increases by 5/4. At speeds in the range of 300 mph, the compressibility of the fluid also plays a role, something that tends to be negligible at lower speeds.

On the other hand, the influence of gravity is no longer relevant. However, it is negligible that the oxygen content in the air – important for the combustion of fuel in the engine – is also reduced from 21 to around 19 percent: perfectly tuned turbochargers press more air into the combustion chambers.

“Our calculations have shown that we would have been around 25 km/h faster in Nevada,” says Stefan Ellrott. But Bugatti decided against this option nonetheless. “Safety comes first at Bugatti. The route in Nevada is very long and only goes in one direction: security forces would have taken too long to get to the scene in an emergency. In addition, the track has a slight gradient of about three percent. It wouldn't have felt right to set a record there.”

But Bugatti set this world record in spite of the less favourable air pressure conditions. An enduring achievement. With this new world record, Bugatti will also withdraw from the competition to produce the fastest serial production cars. “We have shown several times that we build the fastest cars in the world. In future we shall be focusing on other exciting projects,” says Winkelmann.