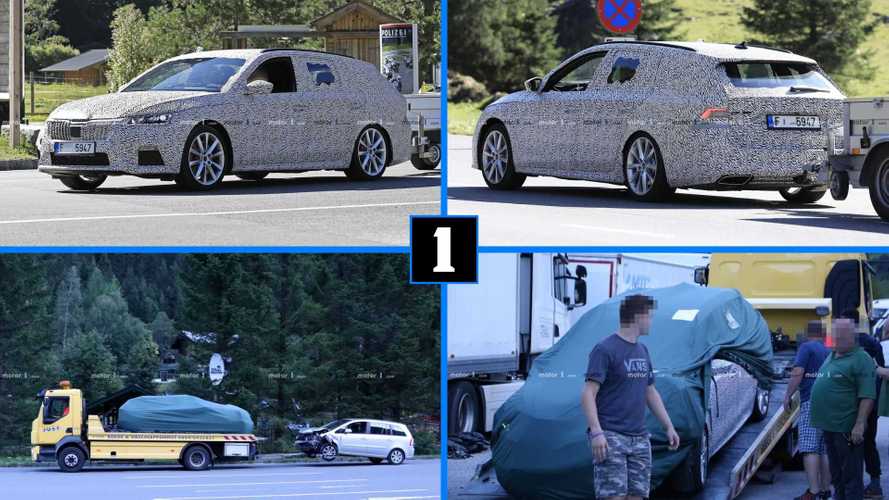 Nobody was injured, but the cars are going to need some serious repairs.

[UPDATE] We have received a new batch of spy shots with the next-generation Skoda Octavia RS Combi. Sadly, we have to report the prototype was involved in a head-on collision with an Opel Zafira. According to our spies, the MPV driver was not paying attention to the road during a lane change and ended up crashing into the Skoda. Both drivers are ok, but we can't say the same thing about the cars.

The fourth-generation Skoda Octavia has been spotted before in both liftback and estate configurations, but not in the spicy RS flavour we have here. It’s obviously the more practical of the two body styles, complete with what appears to be nearly all of the production bits.

From the horizontal strip of fog lights up front to the dual exhaust tips at the back, this is definitely the Octavia RS. Other telltale signs we’re dealing with the amped-up version include the larger brakes and the stiffer suspension setup, while the chunky air intakes up front (they’re blocked-off by the way) further denote it’s the Rally Sport version.

Set to feature the new RS logo that debuted with the Kodiaq RS, the meaner Octavia might go down the hybrid route as per a statement made nearly a year ago by Skoda’s research and development boss, Christian Strube. By adopting a PHEV powertrain, the car is expected to not only have more power than the current model’s 242 bhp and 273 lb-ft, but also slash fuel consumption and emissions.

It would be a win-win situation, although the extra hardware would likely have an impact on weight by adding some fat. An evolution of the MQB platform with a more extensive use of lighter materials could compensate for some of the weight gains, so the Octavia RS hybrid might not necessarily be considerably heavier than today’s car.

The new Octavia is inching closer:

The Czech brand has already toyed around with the idea of a hybrid hot hatch with the unveiling of the Vision RS in October 2018. While that one was a concept to preview the Scala, it did have a 1.5-litre TSI petrol engine working together with an electric motor for a combined output of 241 bhp. The racy showcar even had an electric range of 43 miles thanks to a 13-kWh lithium-ion battery, so don’t be too surprised if one day the Octavia RS will cover small distances without any noise coming from a combustion engine.

Meanwhile, Skoda has confirmed the revamped Octavia will debut before the end of the year to celebrate the nameplate’s 60th anniversary. As for the RS, it likely won’t arrive in Europe before the end of 2020 or early 2021.