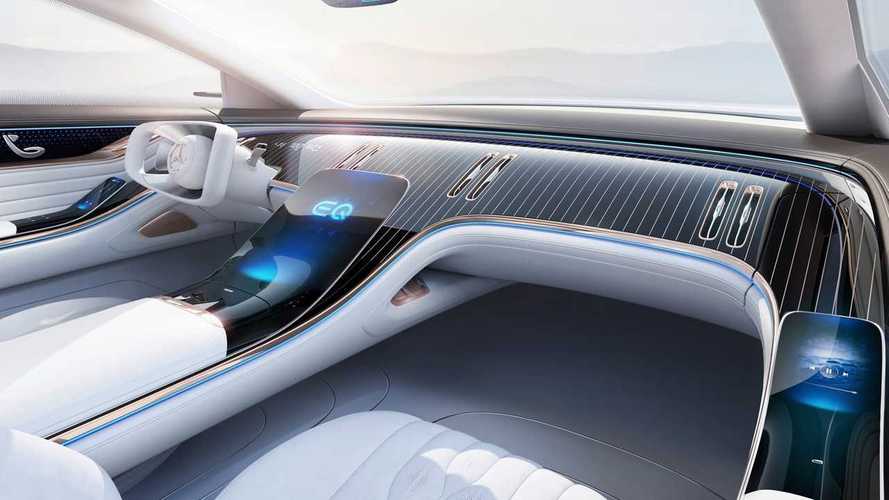 The giant screen is similar to what we've seen already in next-gen S-Class prototypes.

After teasing the appealing exterior design of its new EQ concept earlier, Mercedes is already back with fully revealing images of the showcar’s avant-garde cabin. Believed to be the EQS signalling an electric version of the next-generation S-Class, the boldly designed four-door has a minimalist interior with virtually zero conventional controls.

The four-seater has a spacious interior with individual rear seats separated by a “floating” centre console that bisects the entire cabin. Rear passengers have loads of legroom and a decent amount of headroom despite the saloon's sloping roofline. A dual-pane sunroof is noticeable, as is the lack of B-pillars hinting at the implementation of suicide doors.

The futuristic concept does away with traditional side mirrors as the A-pillars are holding tiny cameras, while the door armrests come with built-in touchscreens for the driver and front passenger to control a variety of functions. There’s another screen serving as the instrument cluster and it’s built into the upper area of the heavily inclined dashboard.

The fact that it still has a steering wheel is an obvious sign Mercedes has envisioned the electric concept with the freedom for the driver to control the car the old fashioned way, although we’re expecting the EQ to have a highly advanced autonomous driving system. There’s no old-school rearview mirror as it has been replaced by yet another display.

The highlight of the interior is without a shadow of a doubt that giant touchscreen dominating the centre console. It makes us believe this is indeed the EQS since spy shots of the next-generation S-Class have revealed Mercedes’ flagship will get a massive display. With this being a concept, it obviously looks fancier, but the idea is the same. Here’s a side-by-side comparison to see what we’re on about.

Presuming this is the EQS (name not officially confirmed), we’ve already seen heavily camouflaged prototypes undergoing testing with what looked to be the production body. The swoopy shape of the test vehicle is quite similar to what Mercedes is teasing here. If you don’t believe us, see for yourself in the visual comparo below.

While the conventionally powered S-Class (W223) will be out in 2020, its electric counterpart is expected to arrive at a later date. If the rumour mill is to be believed, it will ride on the new Modular Electric Architecture (MEA) with an electric motor up front and another one at the back, giving it an AWD layout. It’s too soon to say how much power the two motors will deliver together, but an educated guess says these will pack more punch than the 402 bhp and 564 lb-ft available in the EQC.

Not only is Mercedes coming out with the equivalent of an electric S-Class, but the smaller C-Class will also be going down the EV route in a few years from now as part of Daimler’s electric onslaught.

Meanwhile, the new EQ concept will premiere next week at the 2019 Frankfurt Motor Show.