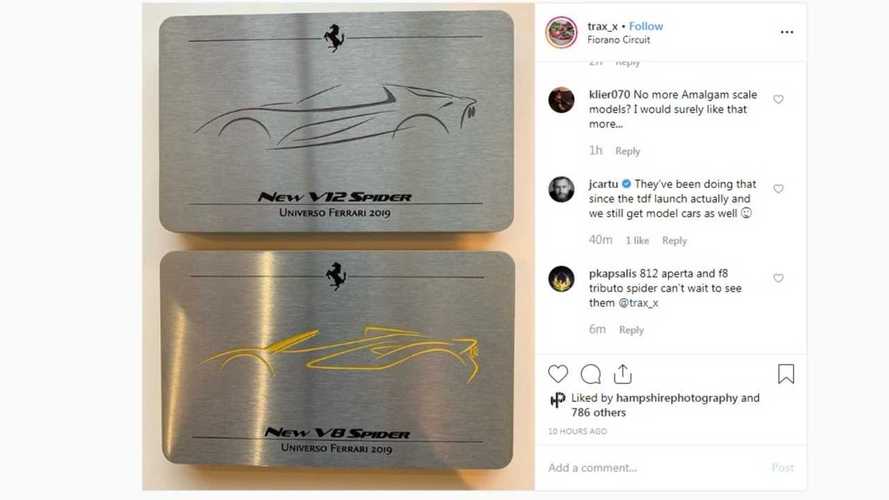 There's a spider invasion in Maranello.

During the Q2 2019 earnings conference call several weeks ago, Ferrari CEO Louis Camilleri announced plans for two world debuts scheduled to take place sometime in September. To maintain a certain degree of mystery, Maranello’s head honcho did not disclose the identity of the two Prancing Horses. However, it’s hard to keep future products a secret these days when automakers invite potential buyers to see the cars before their actual official debuts. Why? Because some attendees immediately jump on social media to share the news.

Case in point, Ferrari Chat member “Trax” took to Instagram to share an image of two paperweights depicting the beautiful silhouettes of Ferrari’s upcoming cars. While the models are vaguely called “V12 Spider” and “V8 Spider,” we are essentially looking at the droptop versions of the F8 Tributo and the 812 Superfast. The official names are not known at this point, although the V12-powered model is reportedly called the “812 GTS” and will be revealed on September 9. The droptop Tributo is due September 24, according to a member of the FC forums.

2019 is one of the busiest years in history for Ferrari in terms of product launches as the two Spiders follow the hybrid SF90 Stradale and the F8 Tributo coupe. We should also keep in mind the epic P80/C, although it’s not a regular production model since it was developed purely as a one-off, track-only car. Following the release of the Spider duo, November will be the month when a new grand tourer is going to be revealed, possibly the V6 hybrid we know they’ve been working on for quite a while.

Further down the line, the Ferrari lineup will grow even more to include the company’s first-ever SUV – the Purosangue. It’s due to arrive by the end of 2022 and will ride on a newly developed front-mid-engine vehicle architecture engineered to accommodate a hybrid powertrain.