The report from Highways England was penned in 2016, but recently uncovered by the AA.

A Highways England report uncovered by the AA has revealed the dangers of breaking down on a smart motorway with all-lane running.

The so-called smart motorways have been introduced up and down the country, theoretically allowing Highways England, the government-run company in charge of the network, to increase capacity by letting traffic use the lane previously designated as the hard shoulder. The lanes are then ‘controlled’ by overhead gantries that govern speed limits and lane closures.

North-west England to get extra 100 miles of smart motorway 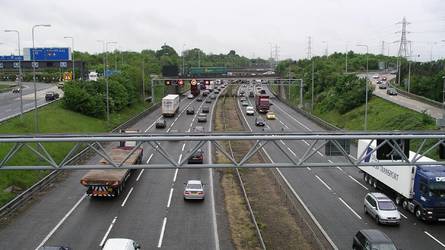 In lieu of a hard shoulder, on which motorists would ordinarily stop and take refuge in the case of an emergency, designated emergency refuge areas (ERAs) have been installed at regular intervals on smart motorways. However, safety concerns have been raised, with the AA claiming in 2017 that the ERAs were too far apart.

Now, though, the AA has found a Highways England report from March 2016 that reveals the time taken to find and identify vehicles broken down in a live lane. According to the report, which looked at a stretch of the M25, the average time taken for a broken-down car to be detected by the Operation Centre’s cameras was just over 17 minutes.

Highways England has rolled out a radar-based stationary vehicle detection (SVD) system that can spot stopped vehicles across multiple lanes in all weathers. Highways England says SVD can detect live lane breakdown events an average of 16 minutes more quickly, but it is only in place along 24.2 of the 135.1 miles of motorway that have all-lane running.

And the report also tells us Operation Centres have a three-minute window to set signal changes, such as the red ‘X’ that closes the lane, once an incident has been identified. Furthermore, the report confesses that stopping in a live-running lane is 216 percent more dangerous than stopping on the hard shoulder.

Edmund King, AA president called on the authorities to stop the removal of hard shoulders and double the number of ERAs available to motorists on roads where the hard shoulder has already become a running lane.

“This is a truly shocking revelation and shows just how dangerous it can be breaking down in a live lane,” he said. “This highlights why growing numbers of the public are justified in their safety concerns over the removal of the hard shoulder. Ultimately, until you are found by the camera you are a sitting duck. Taking three minutes to set the red ‘X’ is too long for someone in a broken-down vehicle to wait. Expecting someone to wait in a dangerous and life-threatening position for 20 minutes is simply inexcusable.

“The safer stationary vehicle detection technology should have been rolled out before any expansion of all lane running was even considered. We are now three years on since their fully-throated commitment to installing stopped vehicle detection to all schemes but only 24 miles has the system in place.”

“The use of cameras has been sold to drivers on the premise that there is 100 percent coverage of the motorway. That is only true if the camera is pointing in the direction you are travelling. This smoke and mirrors approach to the removal of the hard shoulder has gone on long enough. There have been too many incidents, too many near misses and too many excuses as to why promises have been bent or broken. We must stop removing the hard shoulder immediately and double the number of emergency refuge areas already in place.”

However, a Highways England spokesperson said smart motorways were safer than conventional highways, and the SVD technology would be rolled out across all new projects from next year.

“The evidence is clear that smart motorways improve safety, with or without automatic stopped vehicle detection systems,” said the spokesperson. “The latest generation of smart motorways have helped to improve safety by at least 25 per cent. Our trials on the M25 have shown that a stopped vehicle detection system can be a valuable extra tool to help spot incidents more quickly, and the technology is being designed into all the smart motorway projects that we start constructing from next year.

“Meanwhile, we are looking at how we could provide the same benefits on all our other recently opened smart motorway upgrades and work on installing a stopped vehicle detection system on the M3 smart motorway in Surrey and Hampshire is already underway.”