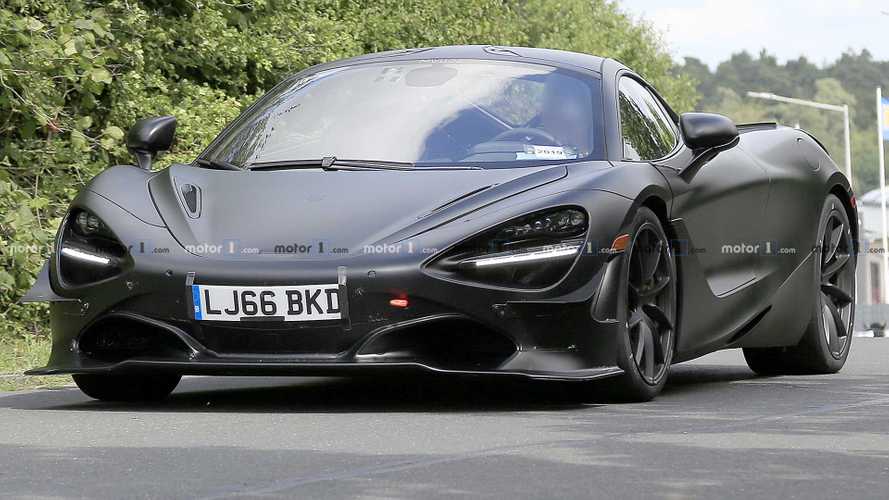 Some of the more aggressive body parts are already visible on this test mule.

The long-tail version of the McLaren 720S, reportedly known as the 750LT, hits the Nürburgring and the roads nearby the famous track in this fresh gallery of spy photos.

This test prototype wears a matte black body that looks fantastic on the car. In front, there's very little camouflage. The only obvious covering is at the corners and presumably disguise inlets that would direct air into the wheel wells. The 750LT also gains canards as part of the revised nose, and the lower fascia has a sharper edge for the splitter.

Why is this McLaren 720S testing at the Nurburgring?

McLaren 720S Longtail coming soon, no side windows for speedster?

At the back, this test prototype lacks the mesh trim around the exhausts that's present on the standard 720S. There's also a little material on the tip of the rear wing that slightly extends it. The tail appears otherwise unchanged, but the panels concealing the rear portion of the side windows could indicate intended changes that aren't yet visible on this vehicle.

If the rumoured 750LT moniker is accurate, look for the model to pack 750 bhp. Expect this output to come from a version of McLaren's 4.0-litre twin-turbo V8.

In addition to the boost in power, look for the weight to fall in comparison to the 720S. For example, the 675LT sheds 100 kilograms versus a 650S.

While spy shots only show the development of the coupe so far, earlier Long Tail models from McLaren suggest there would be a convertible variant of the 750LT, too.

A debut date for the 750LT remains a mystery, but these spy shots and an earlier video suggest that development isn't done yet. It might be a few months before there's an unveiling and even longer before deliveries begin.