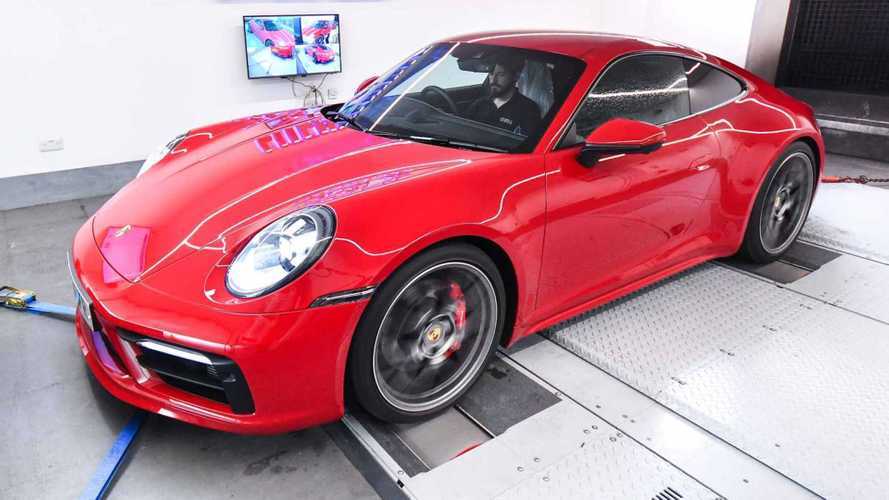 The UK tuner plans to offer new exhausts for the latest 911 soon.

The many variants of the 992-generation of the Porsche 911 are still rolling out, but the Carrera S remains the top dog so far with 443 bhp from a 3.0-litre twin-turbo flat six. More powerful versions are coming, but if any 992 owners are hungry for more power, Litchfield is now ready to help them. The tuner from Gloucester can now push the Carrera S to 572 bhp. Peak torque grows to 480 pound-feet. The improvement costs £995.00. The company will also offer the tune on the base 911 Carrera, but it's not clear how much the power and torque will increase in the less-powerful Porsche.

The only change to achieve this output is a re-calibrated engine management system. Litchfield simply plugs a connector into the 911's ECU without removing anything or even opening any panels. After the tweaks, the vehicle remains European emissions' compliant.

According to Litchfield, the new 911 Carrera and Carrera S use the same basic engine as the 991-generation 911 GTS, although it's worth noting that the base 911's turbochargers use different components and generate less boost than the Carrera S'. The company is already very familiar with tuning this powerplant, and the firm reports that the mill has "a huge amount of headroom for more power."

The new 911 Carrera S has a powerful engine already:

The tuner is already developing a performance exhaust and other mechanical updates for the 992-generation 911 Carrera models. Litchfield touts that new pipes coming from Remus and Akrapovic are already showing impressive improvements, in addition to saving weight.

If you're patient, at least one of Porsche's more powerful 911s should debut before the end of the year. The new 911 Turbo reportedly makes 600 bhp from an updated version of the existing twin-turbo 3.8-litre flat-six engine, and the Turbo S allegedly pushes the output to 640 bhp. The upcoming 911 GT3 reportedly gets a naturally aspirated 4.0-litre flat-six with around 550 bhp, and a Touring version would put this powertrain into a less aggressive looking vehicle.

UPDATE: A previous version of this story indicated that Litchfield had tuned both a base 911 Carrera and a 911 Carrera 4S to produce 572 horsepower and 480 pound-feet of torque. However, the site Porsche Boost emailed indicating that this likely isn't the case since the base 911's turbine and compressor wheels are significantly smaller and its boost pressure is lower than the C4S'. Considering that, it would be unlikely that a single tune could net the same output from both engines..

We emailed Litchfield for clarification. Here is the response from company director Iain Litchfield:

"Thanks for the email and interest in our 992 tuning work.

The development car we used was a Carrera 4S but all the information we could find (mainly through the UK press) was that the European base Carrera would receive the same engine but in de-tuned form because of the latest emissions. The Porsche press release I saw here made no mention of small turbos but I’m more than happy to correct it if I’m wrong. Either way it’s an amazing engine.

Based on Litchfield's comments, we've removed references to the tuned output of the base 911 Carrera from this story and added additional detail on the base engine's differences.