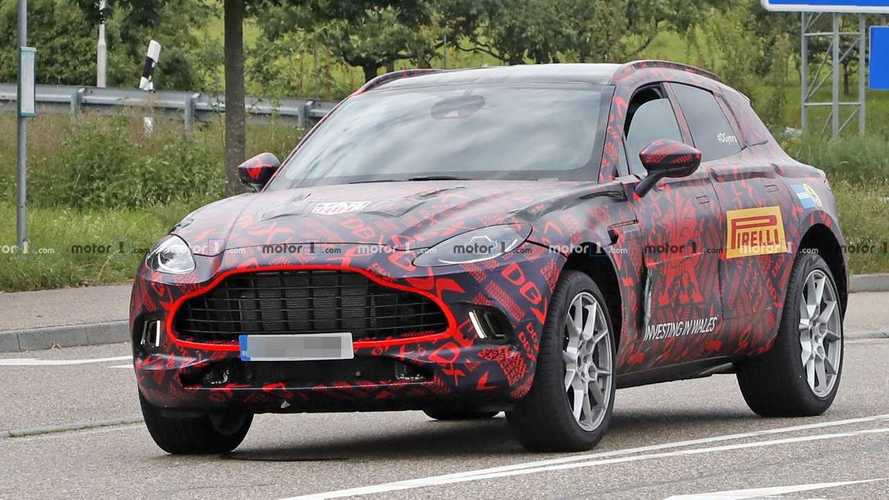 Aston Martin is just about ready to dip its toes into the SUV game.

Unveiled about four and a half years ago, the Aston Martin DBX concept will morph into a production model at the end of the year. While the nameplate will be carried over unchanged, we can’t say the same thing about the showcar’s sleek styling since the road-going model will lose some of the pizzazz while adding rear doors in the process for better practicality.

Prepare to cross off another brand from the list of automakers that don’t have SUVs as the DBX will be the first high-riding model from Gaydon. Better late than never, the Urus and Bentayga rival has now been caught while undergoing last-minute testing. The prototype had all the final body panels in place, as well as the production-spec headlights and taillights.

A typical Aston Martin trait, pop-out door handles should lend the side profile a cleaner side profile as already seen on another British SUV, the all-electric Jaguar I-Pace. While looks are indeed subjective, there’s no arguing the DBX won’t look like a typical SUV thanks to design influences from the company’s sports cars and grand tourers.

You can tell it’s a high-performance SUV just by checking out at the sheer size of the brakes at both axles, while the look-at-me dual exhausts at the back denote it’s not your average sports utility vehicle. Also noticeable is the roof-mounted spoiler with a central fin, along with a rather large built-in spoiler on the tailgate. At the front, the lower corners of the grille are flanked by what seem to be slightly angled LED daytime running lights.

All you need to know about Aston Martin's first SUV:

Underneath the bonnet will reside AMG’s twin-turbo 4.0-litre V8 at first, with Aston Martin’s own 5.2-litre V12 also packing a pair of turbos to arrive at a later date. The Wales-built SUV is expected to inherit the electrical architecture from Mercedes and probably the infotainment system and some of the switchgear as well judging by a batch of interior spy shots we published back in April. An electrified DBX using Mercedes hybrid tech is reportedly in the pipeline, but it will come after the conventionally powered versions.

Series production of the first Aston Martin SUV will kick off in 2020.