See all the slick and wild EVs revealed in Pebble Beach 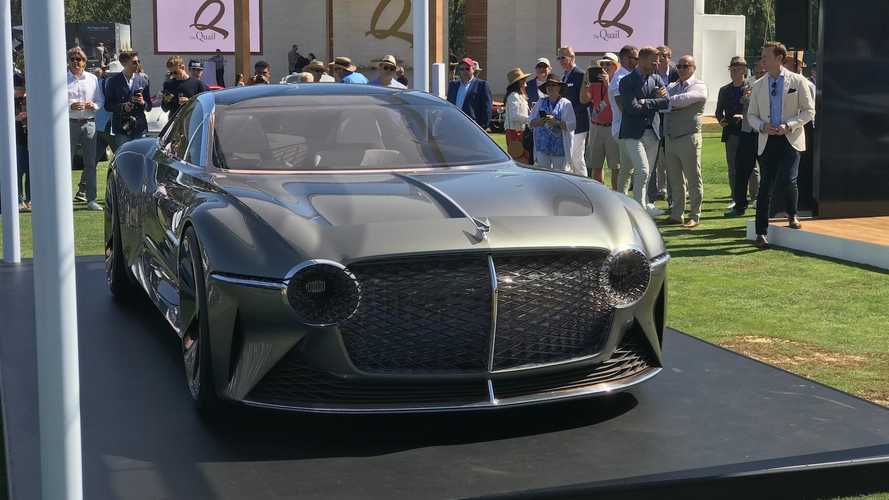 Pebble Beach was full of EVs this year.

Each August Pebble Beach in Monterey California becomes the focal point for everything automotive. From priceless classic cars to vintage motorsports racing to auctions of multi-million-dollar vehicles. In the last few years, Pebble Beach has also become ground zero for the introduction of bespoke electric cars. This year is no different with concepts and electric hypercars being introduced both as concepts and as full-fledged production-ready vehicles. Here is a rundown of the new and unique EVs on display this year.

At the Quail Motorsports Gathering in Carmel, the EXP 100 GT made its US debut. Designed to celebrate 100 years since the Bentley brand was founded, it explores what a Grand Touring vehicle would look like in 2035. The result is a massive battery electric vehicle that measures 5.8 metres long, 2.4 metres wide, and tips the scales at 1900 kg despite having bodywork made of aluminium and carbon fibre. The EXP 100 GT takes the iconic Bentley mesh grille to a whole new level with a massive grille composed of aluminium, copper and over 6000 LED bulbs. Even though the grille and headlights are a more streamlined version of the traditional Bentley front end, one thing remains the bonnet-mounted Flying B.

The powertrain for the EXP 100 GT is a thoroughly modern all-electric powertrain that propels the Bentley from 0-60 in 2.5 seconds and manages a range of 435 miles. Bentley claims that it can fast charge to 80% capacity in only 15 minutes.

The EXP 500 GT will incorporate an AI personal assistant that will handle the driving chores while the passengers sit back and relax in the upscale interior. Bentley says that it has no plans to build the EXP 100 GT, but the concept will serve as a roadmap for design and technology for future Bentley vehicles.

The Battista made its worldwide debut at the 2019 Geneva Motor show in March, and it's US debut at the Quail Motorsports Gathering. It's the most powerful street-legal car to ever come out of Italy. It is being built at Pininfarina's facility in Munich Germany in collaboration with Rimac and shares 40-50% of its components with the Rimac C Two. The Battista is a quad-electric motor vehicle with individual motors placed at each wheel and has a combined power output of about 1,874 bhp and can accelerate from 0-60 mph in less than two seconds and 0-186 mph in 12 seconds with a top speed of 217 mph. Despite its breathtaking performance that exceeds a formula 1 vehicle it is expected to have a range 280 miles. The 120-kWh battery pack is a T-shaped configuration in a carbon fibre monocoque chassis.

To maximise its dynamic balance, with five radiators working to keep the battery at its optimum performance temperature. Pininfarina has said that no more than 150 copies of the Battista will be available worldwide starting in 2020. If the basic Battista is not fast enough for your tastes, there are rumours that Pininfarina is also working on an even faster version. Expect to pay around £2 million for your copy.

The Lotus Evija all-electric hypercar made its North American debut at the Quail Motorsports Gathering to tremendous acclaim. The Evija is also an all-wheel-drive vehicle with four electric motors. To keep the weight down to about 1,680 kilograms, the Evija is equipped with a midship mounted 70kWh battery, that is range rated in the WLTP cycle for 250 miles. But the real advantage is that the battery has an output of up to 2 MW. This, combined with a unique battery Management system, allows for repeatable acceleration without power throttling and can be driven flat-out with full power for at least 7 minutes in track mode.

Making its debut at the Quail Motorsports Gathering is the Silicon Valley-based startup Drako Motors with the Drako GTE an all-electric ultra-luxury four-door saloon. This family supercar features a quad-electric motor design with a total of 1200 bhp and an insane 6,491 pound-feet of torque. While 0-60 times or range haven’t been released, the top speed is claimed to be 206 mph. The GTE sports a 90 kWh liquid-cooled battery and supports 150 kW DC fast charging.

The sexy and long-nosed aerodynamic body is based on the Karma platform from the now-defunct Fisker. But the secret sauce to the GTE is the battery design, the quad electric motors and proprietary vehicle software that runs the vehicle. Drako Motors plans to only sell 25 copies of the GTE with each one at least £1 million. With a price that high and a volume that low, the Drako GTE will indeed be unique.

The Revero GT is an updated and improved version of the Revero that Karma introduced in 2017 which was mostly the now-defunct Fisker Karma which ended production in 2012. The Revero GT was introduced at Auto Shanghai in April 2019.

At the 2019 Pebble Beach Concours, the Revero GT marked its North American debut. The Revero GT is an extended range serial hybrid-electric vehicle with a 28 kWh battery and two electric motors delivering 528 bhp driving the rear axle. The result is a 2,268 kg vehicle that can go from 0-60 mph in 4.5 seconds. Range in battery-only mode is 80 miles, and once the battery gets low, a 1.5-litre turbocharged inline-3 petrol engine sourced from BMW kicks in and extends the range to 360 miles. This engine is identical to the one used in the BMW i8. The interior and exterior a revised from the older Revero with the fit and finish at a very high level of quality. The 2020 Revero GT is being built in Moreno Valley California and will be available in Q4 of 2019 with pricing starting at $135,000 or approximately £100,000 at the current exchange rate.

The Mullen Qiantu K50 started life in 2017 as a Chinese domestic market carbon fibre fully electric supercar produced by CH-Auto. In December of 2018, California based Mullen Technologies signed a cooperation agreement with CH-Auto to produce and sell the K50 in the US.

First introduced in the US at the 2019 New York Auto Show, The Pebble Beach Concours was the west coast debut for the K50.

Mullen is an exciting organisation that has a group of California used vehicle dealerships and the online buying and selling site Carhub.com. Mullen also bought the electric car manufacturer Coda that briefly assembled electric vehicles with parts sourced from China and the US earlier in the decade.

Mullen is now focused on bringing the K50 platform from China and completing the vehicle here in the US from a factory in California.

The US version of the Qiantu K50 is planned for sale starting in mid-2020. Mullen will handle the homologation and final assembly of K50 knockdown kits from China at a final assembly plant in Spokane WA.

By any measure, the K50 is an impressive vehicle. It's about the size of the Rimac C_Two and is a two-motor, all-wheel-drive, two-seat, aluminium-framed and carbon-fibre bodied electric sports car. It will have a 78 kWh liquid-cooled lithium-ion battery is good for about 175 miles of range and Continuous power output is 376 bhp with 402 bhp in boost mode from its two electric motors. The carbon fibre body panels are pre-painted in the moulds. On-board charging includes CCS 125 kW fast charging and 7 kW Level 2 ports. Top speed is limited to 125 mph, and 0-60 mph is in 4.2 seconds. Torque vectoring is standard and uses Brembo brakes front and rear. The K50s weight distribution is 43/57 with the battery behind the passenger compartment.

Mullen is planning a direct sales and service model like Tesla. Sales are initially planned for California and expanding to other CARB-compliant states.

Full gallery of all of these vehicles below: