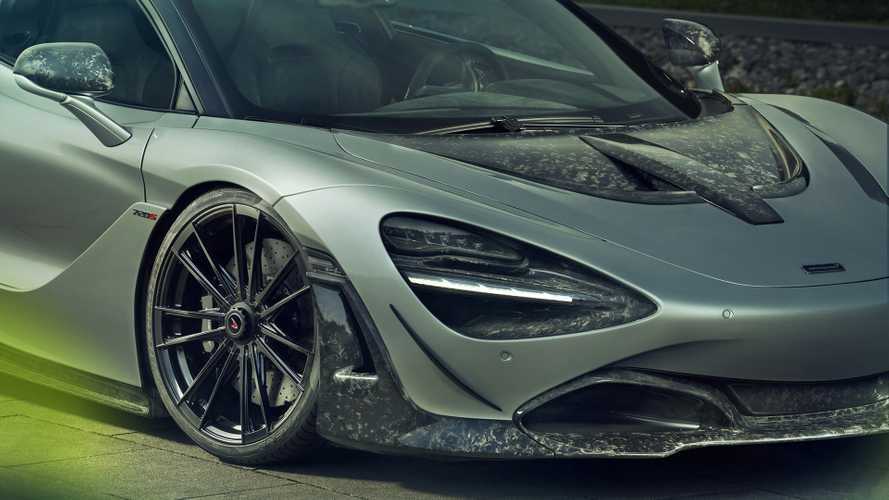 There’s a bump in performance, too.

The McLaren 720S Spider is one of the hottest drop-top supercars on the market right now. It’s capable of hitting 62 miles per hour in 2.9 seconds and 124 mph in 7.6 seconds. It packs a punch. Those looking to spice up the already hot 720S Spider should look no further than Novitec, which has a slew of visual upgrades available for the car along with a bump in performance, too.

Novitec uses forged carbon, a carbon-fibre material that comes with its own unique look. The company developed naked-carbon components for the supercar that visually enhance the drop-top McLaren. At the front, a new front splitter, blade, and side flaps compliment the production bumper. The company also offers forged carbon inserts for the headlights and housings for the side mirrors. Along the side, Novitec has carbon rocker panels and new side air intake covers. The rear features a forged carbon wing, rear spoiler lip, rear fascia, diffuser, diffuser fins, and more.

One standout feature from Novitec is 20- and 21-inch wheels for the McLaren. The fronts receive the small-diameter wheels, which help accentuate the 720S’s wedge shape. Vossen manufactures the wheels exclusively for Novitec, too. Novitec also lowers the Spider’s right height by 30 millimetres. Completing the look is a custom exhaust available in polished stainless steel or matte black, which are available with or without actively controlled exhaust flaps. Customers can opt for a stainless steel exhaust or one made from INCONEL.

The aftermarket tuner also offers three performance kits for the McLaren, giving the twin-turbocharged V8 more power. The Level 2 performance pack takes the V8 to 806 bhp and 647 pound-feet of torque. The increase in power allows it to hit 62 mph in 2.7 seconds and 124 mph in 7.6 seconds. Top speed increases to 214.9 mph, up from 212 mph.

Novitec’s assortment of visual and performance upgrades can really make a McLaren 720S Spider stand out from the crowd. The forged-carbon look may not tickle everyone’s fancy, but there’s no doubt it looks different and unique.

For decades, the NOVITEC designers have had just one mission: giving the most exclusive automobiles an even more thrilling appearance and further optimizing their aerodynamic efficiency. For the 720S with retractable hardtop, they developed naked-carbon components manufactured from forged carbon. This carbon-fiber material has its own look, which differs greatly from the common carbon structures. Of course, it also offers an outstanding combination of lightweight design and strength.

NOVITEC gives the front of the 720S Spider a striking facelift: the production bumper is complemented with a front spoiler, front blade and side flaps, which reduce front-axle lift at high speeds. The thrilling appearance is rounded off with the NOVITEC forged carbon inserts for the headlamps, the N-LARGO trunk lid and the forged carbon housings for the side mirrors.

NOVITEC carbon rocker panels upgrade the sides of the 720S Spider. They continue the racing look consistently. The aerodynamic fine-tuning the NOVITEC way also includes new covers for the side air intakes on both sides of the vehicle. They route the airflow even more precisely into the vents behind the two doors, which provide the engine with breathing and cooling air.

The rear end is dominated visually by the NOVITEC rear wing, which further increases aerodynamic downforce. A rear spoiler lip with a more understated design is available as an alternative. Elaborate forged carbon elements such as rear fascia, diffuser and diffuser fins add further motor racing touches at the rear. The NOVITEC appearance package is rounded off with carbon side panels for the rear fascia.

The hi-tech wheels, which are produced by American high-end wheel manufacturer Vossen exclusively for NOVITEC, are just as elementary for the thrilling NOVITEC looks for the drop-top McLaren. They are mounted on the front and rear axle in a combination of 20 and 21-inch wheels, which with their different diameters emphasize the wedge shape of the mid-engine car visually.

Thanks to their design featuring seven slender double-spokes and their production using state-of-the-art forging technology, these wheels with stylized center lock are extremely light for their king-sized dimension. The MC3 wheels are available in 72 different colors and optionally also with brushed or polished surface.

NOVITEC MC1 forged wheels with five pairs of spokes are available for the McLaren 720S models as an alternative.

In addition to further sharpening the looks of the Spider by lowering the ride height by about 30 millimeters, the NOVITEC sport springs also give the car even more responsive handling.

This makes the drop-top McLaren perfect for even more power. The 4.0-liter eight-cylinder with two turbochargers offers an excellent basis for powerful tuning. For the 720S, the engine specialists developed three different performance kits, which are all based on the plug-and-play NOVITEC N-TRONIC auxiliary control unit. It is adapted to the engine controls of the vehicle and supplies them with new mapping for injection, ignition and boost pressure control.

In the most powerful performance level 2, which additionally includes a NOVITEC RACE high-performance exhaust system, the engine puts out an extra 63 kW / 86 hp and produces 108 Nm more torque. This means the turbocharged V8 with NOVITEC tuning has an impressive output of 592 kW / 806 hp at a low 6,700 rpm and produces a peak torque of 878 Nm at 6,300 rpm.

This naturally also benefits the performance on the road: The tuned 720S Spider hits 100 km/h after just 2.7 seconds and 200 km/h a mere 7.5 seconds after the start. Top speed increases to 346 km/h. On the road, the NOVITEC performance upgrade is not only evident in the further improved acceleration figures, but also in an even more instantaneous throttle response and even stronger pulling power.

The installation of a NOVITEC high-performance exhaust system is advisable for any McLaren 720S even without engine tuning. The exhaust system with two 95-millimeter tailpipes offers a choice of polished stainless or matte black finish and is fully thermally insulated to reduce heat build-up in the engine bay. It is available with or without actively controlled exhaust flaps. The sport exhaust is made from stainless steel or optionally from the even lighter material INCONEL, which is also used in Formula 1 racing and in aerospace. In addition, the product range comprises lighter and even more efficient sport catalysts.

NOVITEC also offers refinement of the highest individual nature and quality for the cockpit of all sports cars from McLaren. The company uses the finest leather and Alcantara in a virtually unlimited variety of colors to create interiors tailored exactly to the vehicle owner's wishes.