Is this going to be a brand new model? Only time will tell.

It’s been close to two years since we last heard about the Wiesmann brand, which announced a new partnership with BMW back in October 2017. The cooperation between the two companies is finally materialising into a new model, which will be revealed during the 2019 Frankfurt Motor Show in mid-September. We have the first teaser image of that car and it already looks promising.

AutoRai.nl released a photo of the car under covers, taken at the brand’s factory in the city of Dulmen, in Germany’s North Rhine-Westphalia region. It shows what appears to be a two-door coupe with a muscular side profile and a front fascia incorporating Wiesmann’s corporate design of the radiator grille. It’s surrounded by two headlight clusters but their exact shape and design can’t be seen at the moment.

Judging by this first glimpse of the new and yet-unnamed model, the car could be an updated version of the GT MF4-CS that was first revealed during the 2013 Geneva Motor Show. The car was powered by a V8 engine, delivering 420 bhp and allowing the coupe to sprint from 0 to 62 miles per hour in just 4.4 seconds. Top speed was 182 mph.

Wiesmann is back in business: 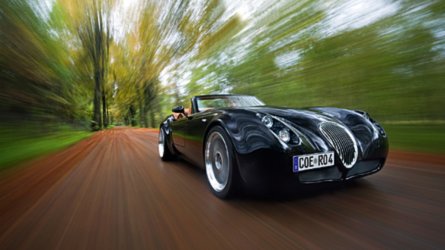 If our guess is correct, Wiesmann will update the model with a new V8 engine. Thanks to the aforementioned partnership with BMW, the German boutique carmaker will receive the 4.4-litre S64 motor, which is used in the current M5. In the performance saloon from Bavaria, this unit churns out 600 bhp and 553 lb-ft in standard trim and even 625 bhp in Competition-spec. For now, the exact power figures of Wiesmann’s new model are not known but expect them to be well above the 420-bhp mark of the GT MF4-CS.