2020 Mercedes GLE Coupe spied for the last time, it's an AMG 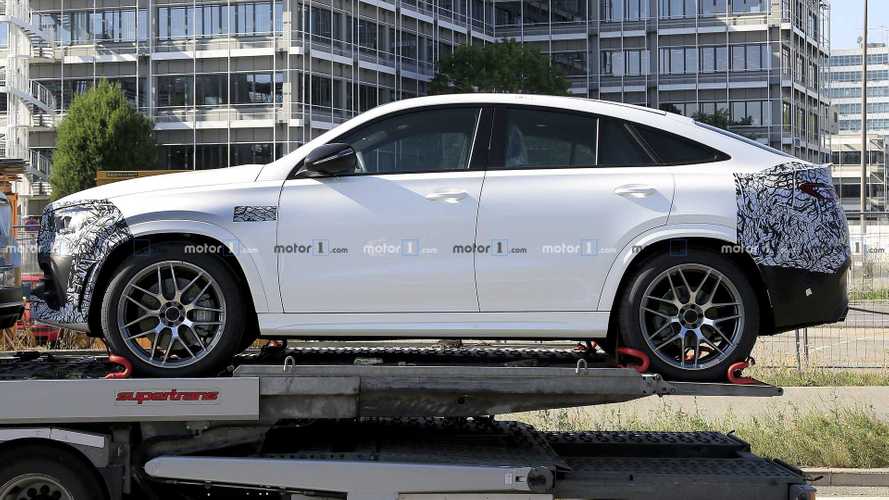 You're looking at the electrified AMG 53 version.

We’re merely a few hours away from the world debut of the next-generation Mercedes GLE Coupe, but that didn’t stop our spy photographers from snapping one more set of images with a near-production prototype. Caught with very little camo, the test vehicle was resting on a trailer behind a GLE 53 while en route to Daimler’s R&D centre in Stuttgart.

Much like the conventionally styled SUV in front of it, the GLE Coupe was an AMG 53 variant judging by the sporty body kit, Panamericana grille, and the quad round exhaust tips flanking a pseudo diffuser. Compared to the outgoing coupe-SUV mashup, the next iteration appears to have a considerably more sloped roofline towards the rear, but that still won’t make it a coupe.

The disguise applied at the back by Mercedes gets in the way of seeing what has changed, although from what we can tell, the revamped GLE Coupe appears to have a far more appealing derrière. It looks particularly appealing in this warm AMG trim, and it should be even nicer in the full-fat 63 guise. Overall, we think the exterior styling is a major improvement over its predecessor, but as the saying goes, beauty is in the eye of the beholder.

In case you’re not familiar with the AMG 53 recipe, it was inaugurated last year with the E53 and CLS 53 models before debuting on the latest-generation GLE a few months ago at the Geneva Motor Show. Its “coupe” counterpart will feature the same inline-six 3.0-litre turbo engine working together with an electric motor mounted between the combustion engine and the nine-speed automatic transmission. The electrified powertrain will be good for a combined output of 429 bhp and a meaty 384 pound-feet of torque.

New Mercedes-Benz GLB-Class, GLE Coupe spied out and about

Performances should closely mirror those of the regular GLE 53, which needs 5.3 seconds to hit 62 mph from a standstill before topping out at an electronically governed 155 mph.

Following its imminent debut, the new Mercedes GLE Coupe will make an appearance at the Frankfurt Motor Show in about two weeks. Chances are the AMG 53 variant is going to be showcased at IAA as well, with the range-topping AMG 63 to arrive towards the end of 2020.