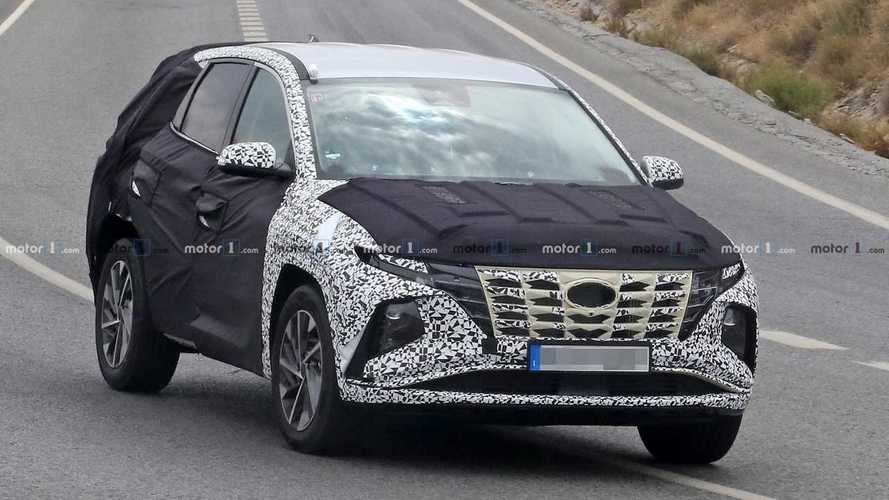 It appears the compact crossover will get a split headlight design.

It was only last week when our spies sent us the very first batch of images of the next-generation Tucson, and now Hyundai’s compact crossover has been spotted once again. Not only that, but the photos are better than the original set since they’re showing a test vehicle with significantly less camouflage at the front fascia to reveal more of the production skin.

The oddly coloured front grille is an interpretation of Hyundai’s recent “Cascading” corporate grille similar to what we’ve seen already on the Grandmaster concept. The grille is flanked at the upper corners by slim LED headlights in the same vein as the Venue, Kona, Nexo, and the Palisade flagship SUV. The second cluster of headlights is mounted lower on the front bumper to give the revamped Tucson a significantly different appearance compared to the current model.

When the disguise will come off, expect the Tucson's exterior design to “freak out” people, according to Sangyup Lee, the vice president of styling at the Hyundai Design Center. Having seen the gorgeous 2020 Sonata, we have high hopes the company’s refreshed design language will have a positive impact on the fourth-generation Tucson as well.

The rest of the prototype still wears quite a lot of camouflage and it might be missing the rear bumper taking into account we can see quite a lot of what’s going on underneath the SUV. We do notice the squarish wheel arches and a greenhouse not that much different than it is today. Interestingly, there are rumours indicating the Tucson will be available in a bigger size with three-row seating, but only in India where the seven-seat variant will be locally manufactured as a possible replacement for the Santa Fe.

The overhauled Tucson is expected to debut at some point next year.

Can't wait for the next gen?