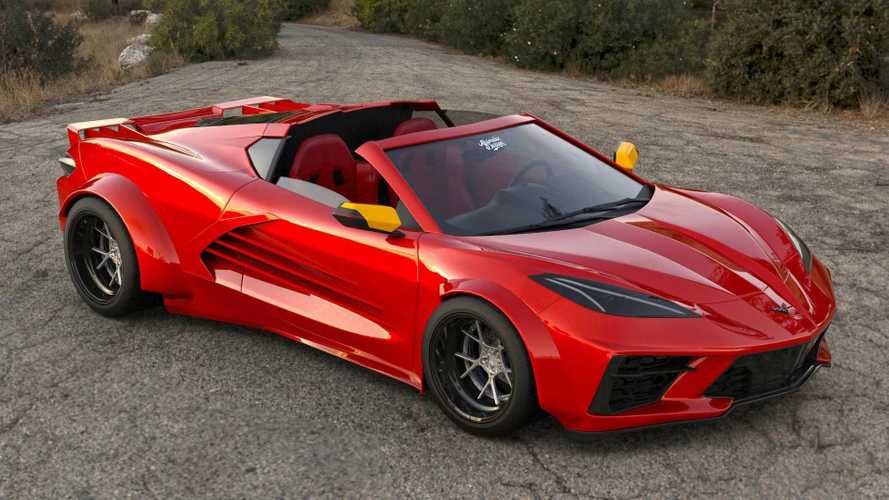 What an odd mix of styling elements.

The 2020 Chevrolet Corvette may turn out to be one of the most important sports cars of the coming decade, judging by the pre-release hype. Similarly, the Ferrari Testarossa is one of the automotive icons from the 1980s. Combining these two designs seems like a weird idea because of the decades separating them. Still, Abimelec Design was curious about the look of a widebody kit for the 'Vette with Testarossa styling cues and came up with these odd renderings.

The design is certainly eye-catching, if not beautiful. The front end remains largely stock except for the wider wings, but things get wild from there. The Testarossa's cheesegrater side strakes start on the doors and lead back to the side intakes. Big arches cover the wider wheels, and yellow mirror covers add a colourful flourish.

At the back, the strakes on the rear deck become the uprights for the wing. When looking at the tail, it's clear that the wheel arch flares remain open at the back. The design doesn't seem too functional but looks stylish.

While the design might not be to your taste, there's nothing here that seems unrealistic for production. The strakes, wheel arch flares, and wing would all be fairly simple additions to the C8's body, and they could make a big difference to the car's look, judging by these photos.

The 2020 Corvette goes on sale later this year in the U.S. All models come with a 6.2-litre V8 making 490 bhp and 465 pound-feet of torque. The performance exhaust adds 5 bhp and 5 lb-ft. The only gearbox choice is an eight-speed automatic. Buyers can also specify the Z51 package that adds a revised suspension, tweaked body kit, electronic limited-slip differential, improved cooling, and bigger brakes.