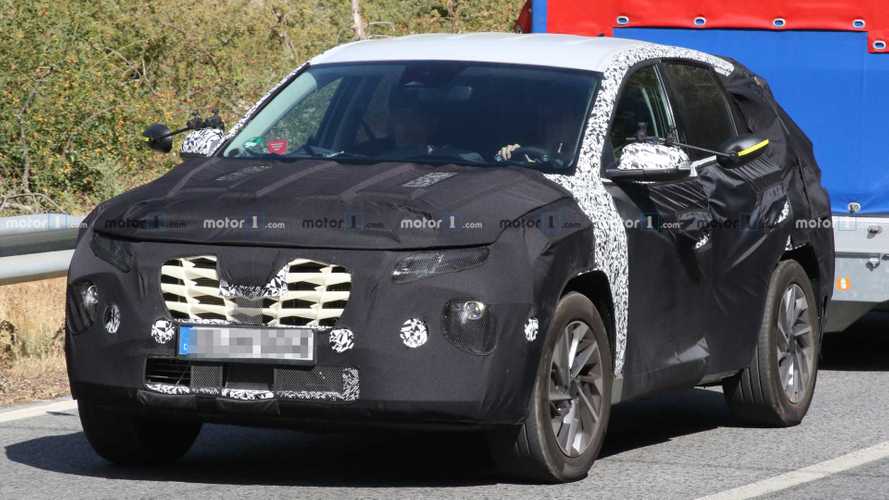 How fast do things move in the SUV world? Consider the current Hyundai Tucson, which debuted a major facelift just a year ago at the New York Auto Show. More recently, Hyundai pulled the covers off the hotter Tucson N Line, giving its cool crossover a bit more visual pizzaz. That was only a few months ago; now we have our first set of spy photos showing the next-generation Tucson wearing heavy camouflage while undergoing hot-weather testing.

The current Tucson is still on sale:

It's obviously being put through its mechanical paces as well, towing a hefty-looking trailer with suspension squat noticeable at the rear. In-depth powertrain testing should be required this time around, because this prototype likely has a new 2.5-litre Theta3 engine under the bonnet, coupled to an eight-speed automatic transmission. In the North American market, this mill should be offered in either naturally aspirated or turbocharged format, with an updated 1.6-litre diesel offered in the European theater. The hybrid powertrain borrowed from the Sonata could also underpin the popular SUV.

As for the outside, Hyundai Vice President of Design Sangyup Lee said people will “freak out” over the next-gen Tucson's looks. We assume that was meant to be a positive thing, but with this prototype heavily disguised by camo wrap, tarps, and false body panels, it's tough to gauge exactly what he was on about. This being our first look, we see a very Tucson-esque shape in profile, and it's not hard to imagine Hyundai's distinctive grille up front. There are clearly changes to the front fascia, notably with the headlamps and daytime running lamps. We're struggling to see anything that might be considered freak-worthy, but to be fair, the design cues on this test vehicle are well hidden.

With a significantly updated Tucson having just debuted for the 2019 model year, don't expect Hyundai to lift these covers anytime soon. That said, we're still not talking about years before a reveal – we've seen just how fast things move in the SUV market. Our sources believe this all-new SUV will land later next year as a 2021 model.