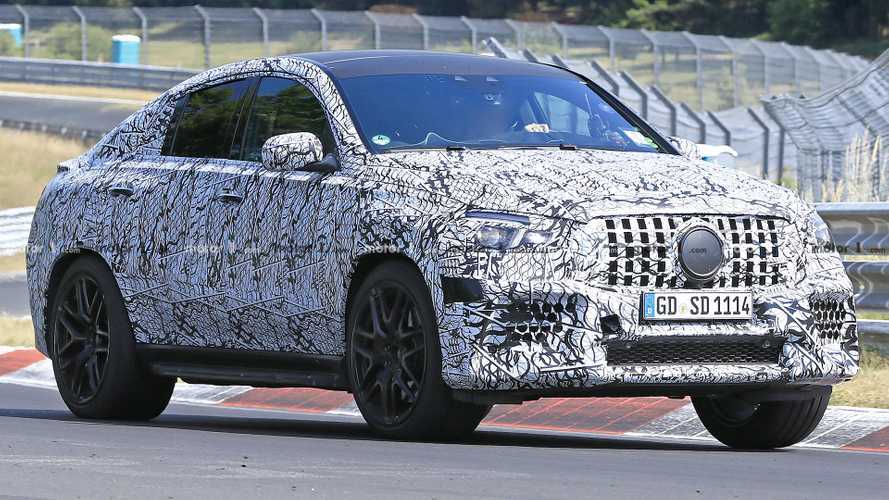 It looks quite burly.

The Mercedes-AMG GLE 63 Coupe will be the range-topper in the coupe-inspired crossover's range. This fresh gallery of spy shots catches the powerful model's development on the Nürburgring.

The engineers keep this test prototype under heavy camouflage, but previous, less covered examples give us an idea of what to expect (see below). The front end is like the GLE-Class, but the AMG-tuned 63 model wear the Panamericana grille with an array of vertical slats. It has a more aggressive front fascia, too.

At the back, this example has had some trouble because something happened to rip a piece of camouflage off the body. It doesn't expose much underneath, though. The GLE 63 has two sets of dual exhaust pipes and a diffuser running between them. There's also a more prominent spoiler than on other variants.

There is already a spy video on the standard GLE 63's interior, and the layout should apply to the Coupe, too. It has screens across much of the dashboard for instrumentation and infotainment purposes. Expect sporty trim like Alcantara and carbon fibre to fit the performance-oriented powertrain.

Expect the GLE 63 Coupe to use Mercedes-AMG's 4.0-litre twin-turbo V8. The brand builds the powerplant in a variety of outputs, but expect the version in this crossover to have in excess of 600 bhp, potentially as much as 630 bhp.

The current speculation indicates that the new GLE Coupe should debut in very early 2020. The hot 63 variants might arrive a little later because Mercedes generally staggers their debut.