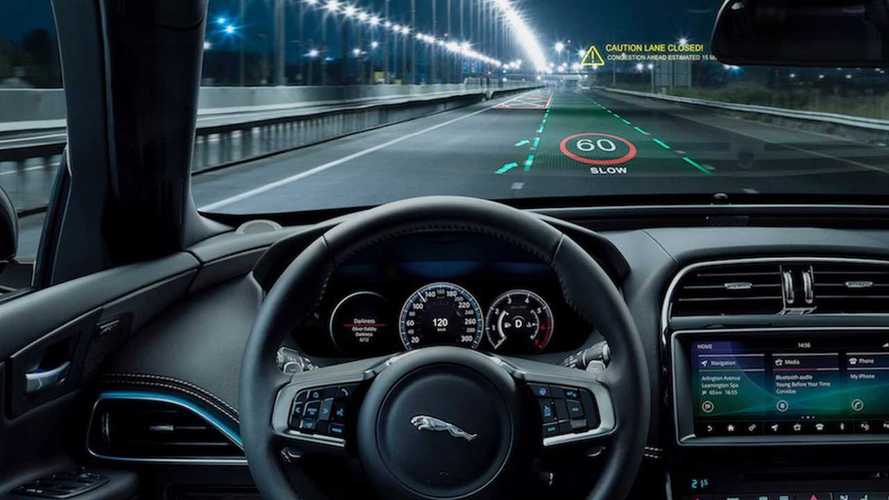 British car manufacturer Jaguar Land Rover has confirmed it is working on a three-dimensional head-up display system that will ‘project’ information into the real world.

The clever tech, which is part of a next-generation infotainment system, uses augmented reality to map images directly on to the road ahead. For example, a warning that the vehicle is wandering out of its lane could be displayed over the lines of the road, while lane closure information could be displayed above the relevant lane.

According to Jaguar Land Rover (JLR), the stereoscopic 3D technology would improve safety. The car maker cited studies carried out in Germany, which show that such displays can improve reaction times on “popping-out” instructions and increase depth judgements while driving.

But while drivers could soon be experiencing 3D information displays, passengers could end up with 3D infotainment in their vehicle. Using much the same technology as the head-up displays, JLR is working on 3D movie systems.

Working with head- and eye-tracking technology, the system would follow the user’s position to ensure they can see three-dimensional images. This would also mean there would be no need for individual screens or the shutter glasses worn at the cinema.

Valerian Meijering, human machine interface & head-up display researcher for Jaguar Land Rover, said the project, undertaken in partnership with the Centre for Advanced Photonics and Electronics (CAPE) at the University of Cambridge, would help the company achieve its goals for smart motoring.

“Development in virtual and augmented reality is moving really quickly,” he said. “This consortium takes some of the best technology available and helps us to develop applications suited to the automotive sector. Not only does it provide a much richer experience for customers, but it also forms part of our Destination Zero roadmap; helping us to move towards a safer, more intuitive and smarter future, for everybody.”

“This programme is at the forefront of development in the virtual reality space – we’re looking at concepts and components which will set the scene for the connected, shared and autonomous cars of the future,” he said. “CAPE Partners are world-leading players strategically positioned in the value chain network. Their engagement provides a unique opportunity to make a greater impact on society and further enhance the business value of our enterprises.”