The Taycan will be the first production car to fully integrate Apple Music, with 50+ million ad-free songs.

As the Taycan’s long-awaited September 4 debut is fast-approaching, Porsche is generating more buzz around its first electric car by releasing an unprecedented number of teasers. The latest episode revolves around the EV’s built-in Apple Music feature, with the folks from Stuttgart saying the Taycan will be the world’s first production car to fully integrate Apple Music in its infotainment system.

We've seen it before: 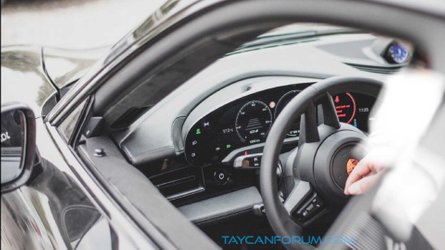 Long story short, owners will have access to more than 50 million songs without being bothered by pesky ads. In addition, Porsche and Apple will also throw in thousands of Taycan-exclusive curated playlists as well as three years of in-car Internet (with external antenna and roaming package) and up to six months of free Apple Music. If you’re familiar with the Beats 1 global livestream, you’ll be glad to hear that one too will come bundled with the purchase of a Taycan.

What we’re more excited to see is the car’s dashboard, at least the upper section revealing a very 992-esque design and a steering wheel virtually carried over from the latest 911. The fully digital instrument cluster shows five selectable driving modes: Normal, Sport, Sport+, Individual, and Range, with the latter likely maximising efficiency to extend your journey between two charges.

As expected, the interior is not as sleek as the Mission E’s, but that’s what happens when a concept makes the transition to a production model. The side-by-side comparison between the two (plus the latest 911) better shows the changes and also gives us an idea of how the rest of the Taycan’s cabin will look once the wraps will come off in a couple of weeks.

Porsche is still not willing to spill the beans regarding the technical specifications, with the German brand only reminding us its pure electric all-wheel-drive saloon will have over 600 bhp, an 800-volt architecture, and a lithium-ion battery pack with a capacity of about 90 kWh. In terms of performance, it’ll do 0 to 124 mph in less than 10 seconds as demonstrated recently with a near-production prototype that was put through its paces in dozens of acceleration tests.

Following its September debut, the 2020 Porsche Taycan will hit the market towards the year’s end. 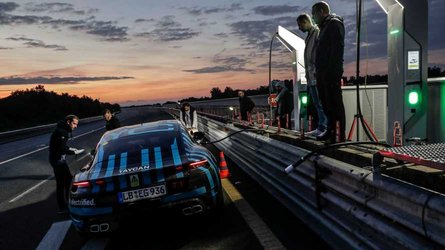 Stuttgart. Porsche has teamed up with Apple Music to create the first fully integrated music streaming experience inside the much-anticipated Porsche Taycan, the first fully electric Porsche vehicle launching in September. From the touchscreen display in the Porsche Advanced Cockpit, Apple Music subscribers can stream over 50 million songs ad-free, thousands of curated playlists, and the Beats 1 global livestream with three-year complimentary in-car internet data. This is the first-ever full integration of Apple Music in any vehicle.

“Porsche and Apple Music fit perfectly – we share common values, and the same relentless attitude to user experience, to quality engineering, to design, and to innovation,” says Detlev von Platen, Member of the Executive Board for Sales and Marketing at Porsche AG. “Together, we bring innovative digital entertainment technologies in our high-performance sports cars, starting with our fully electric Taycan.”

"Listening to music while driving can be an electrifying feeling," said Oliver Schusser, Vice President of Apple Music and International Content. “Since Apple Music launched, we’ve been working to bring our customers the best music experience possible in the car, and Porsche has been on the cutting edge in this space. Porsche builds sports cars at the highest level and today, with the introduction of the Taycan, customers now can choose Apple Music built-in seamlessly to find the perfect soundtrack for every drive.”


Taycan in-car experience
Drivers can also enjoy the following features and benefits in the Taycan due to the unique collaboration between Porsche and Apple Music:

For music lovers with a fine ear, Taycan drivers can pair a Burmester High-End Surround Sound System with Apple Digital Masters and enjoy studio-quality sound for an unparalleled listening experience in every journey. Apple Digital Masters delivers music as artists and sound engineers intend it to be heard.

Taycan also comes with Apple CarPlay support. Drivers can easily connect their iPhone and get directions optimized for traffic, make calls, send and receive messages, and listen to Apple Music by simply tapping the Taycan touchscreen display or with Siri voice control, all while staying focused on the road.

Porsche’s first fully electric sportscar
The Porsche Taycan will be presented in September and launched on the market at the end of the year. The all-wheel drive vehicle with over 600 PS will have an 800-volt architecture, enabling short charging times. The lithium-ion battery will boast a capacity of around 90 kWh.