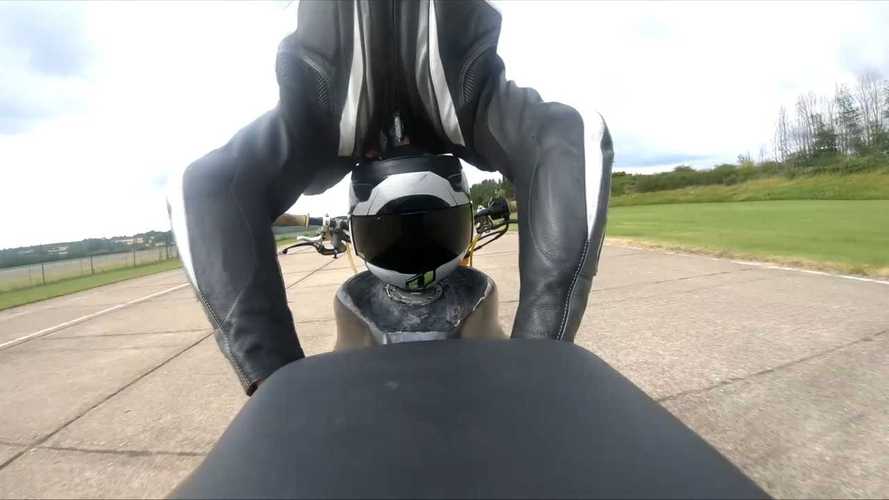 After years of training, this guy finally cracked it at the Elvington airfield in North Yorkshire.

Did you know that there’s a world record for ‘fastest headstand on a motorbike’? If you didn’t, you do now thanks to British daredevil Marco George. On Saturday, August 17, 2019, he managed a top speed of 76.1764 mph at the Straightliners World’s Fastest Wheelie Competition at the Elvington airfield in North Yorkshire. You can see video of his run below.

The Guinness World Records people haven’t officially ratified this record just yet, but it is expected that they will do so. The organisation had informed George earlier that the previous speed record was 30 mph. George hoped to at least double it with his own attempt—and appears, by all accounts, to have succeeded.

George is a robotics engineer by trade, but according to The Irish News, he likes to do stunt riding competitions on a semi-professional level. He has been working on doing this stunt for a couple of years now. With a concentration on building core fitness and also practising in full leathers, George was able to make two runs that would have set new world records.

His first run clocked in at 68 mph, but then Straightliners founder Trevor Duckworth suggested that George try for a nice, round 70 since that’s the national speed limit. After setting the 76 mph record, George said, “I promised my mum that if I hit 70 I’d call it a day, so I have to honour my promise to my mum because she’s not too happy with watching this.”

George, who posted a preliminary video from the record-breaking run on Facebook, also mentioned that he has GoPro footage from the event that he plans to post at a later date. The header image comes from one of George’s many practice sessions ahead of the event, so it will be interesting to see what kind of footage he captured on the actual day. Congratulations on this heady achievement! Now, go hug your mum and tell her you’re sorry.