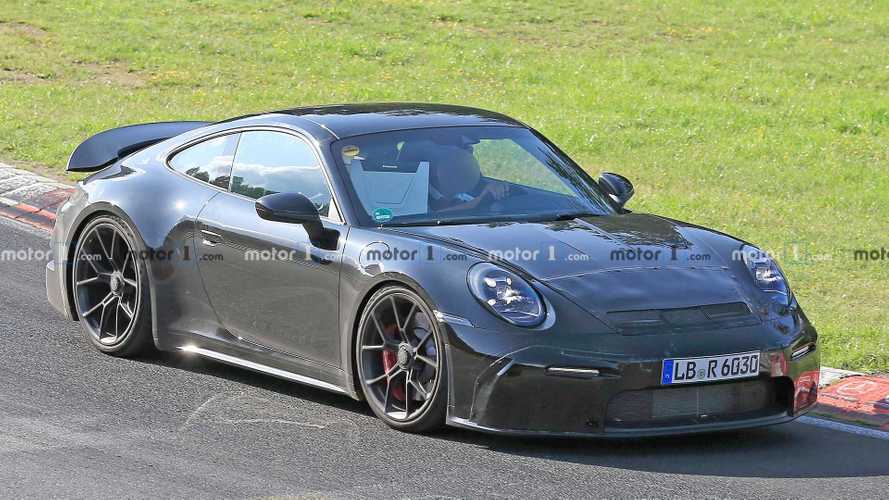 Production-spec body panels could be in play.

We’re just shy of two years since Porsche unveiled its suave 911 GT3 Touring Package. Equipped with the same power wrapped in a slightly subdued exterior, the car was a hit among buyers who wanted a limited-edition Porsche 911 R but couldn’t jump on the crazy train of 911 R pricing. We’ve caught occasional glimpses of a new 911 GT3 Touring Package for the 992 era, with the most recent spy shots coming from everyone’s favourite monster in the mountains, the Nürburgring.

The new 911 shape is familiar to everyone by now, primarily because it’s not much different than the old 911 design. These shots are interesting, however, because it’s the first time we’ve seen the GT3 Touring wearing a camo screen on the frunk. We’ve seen spy shots of standard GT3 prototypes with the same thing, and the rear fascia of this particular GT3 Touring looks cleaner than previous test cars we’ve seen. Perhaps this suggests that Porsche is testing the Touring with production bodywork.

Perhaps of more interest is what lurks beneath the skin. It’s been long-rumoured that the next-generation GT3 will keep its naturally aspirated flat-six, but even further massaged to make an incredible 550 bhp from just 4.0 litres of displacement. The previous GT3 Touring dispensed that power with a six-speed manual transmission, and it’s quite possible this version could offer the same hands-on setup for purists to enjoy. Based on recent spy videos showing the GT3 lapping the ‘Ring, its engine certainly sounds like a high-revving symphony of horsepower. There’s also a recent spy video of the GT3 Touring, and it sounds like the driver is shifting gears manually.

Porsche unveiled the original 911 GT3 Touring Package at the Frankfurt Motor Show in September 2017, and we’re just a few weeks away from the 2019 show. Does that mean a new GT3 Touring reveal is nigh? Probably not, unless Porsche decides to pull the covers off it and the standard GT3 at the same time. It’s certainly possible, but a more likely scenario has the GT3 debuting at Frankfurt this year, with the Touring Package arriving in 2020.