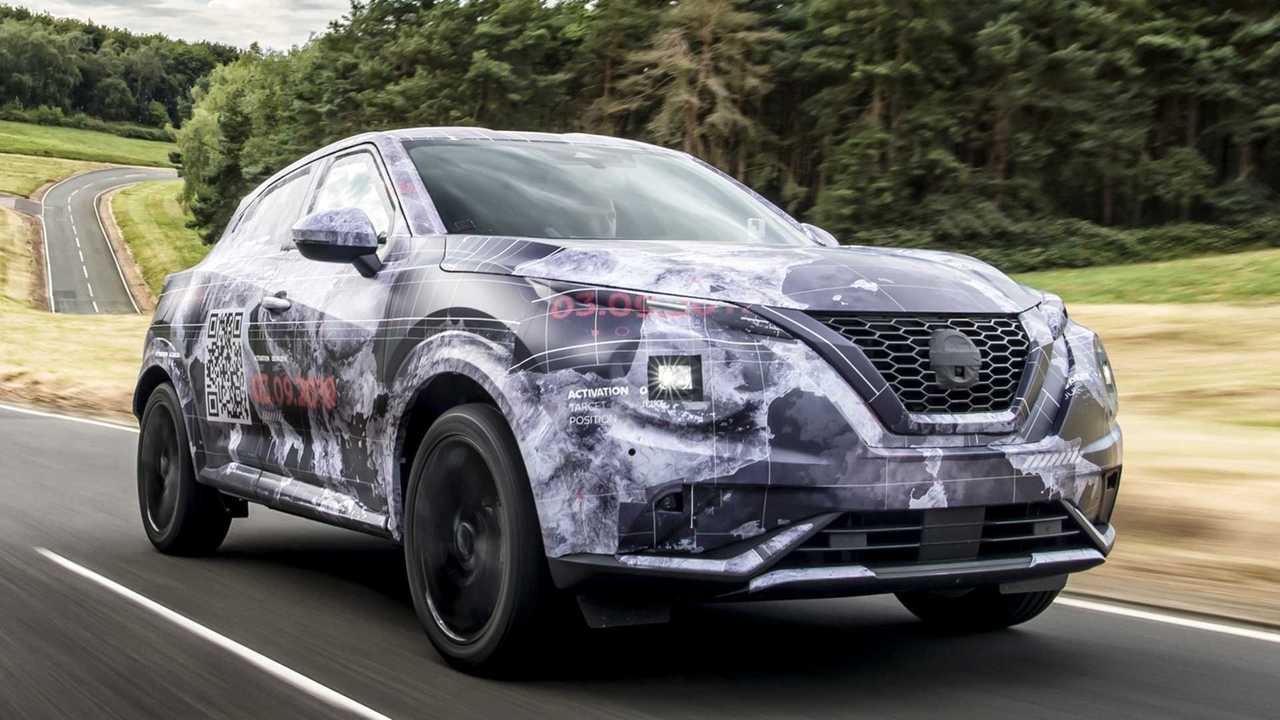 Nissan is gearing up to reveal the second-generation Juke for the 2020 model year, but the company isn’t finished with the teases just yet. The company has been dropping teasers leading up to the reveal, and the latest from the Japanese-based automaker is a trio of images of a camouflaged prototype along with new information about the funky crossover.

The images give us our best look yet since our last round of spy photos. While the U.S. has the much more tame and traditional Nissan Kicks, European customers, where the Juke has been a smashing success for the company, will get a second-generation Juke that appears to retains the original’s funky aesthetic. The camouflage does a tremendous job hiding the new Juke’s design details; however, it’s impossible to hide its overall shape. The sleek windscreen, sloping roof, and stylish hatch all return.

Nissan dropped a few concrete details about the crossover along with the images. The 2020 Juke will come with 19-inch wheels, Nissan ProPILOT technology, and it will grow in size over the outgoing model, which will give the crossover more room inside. Nissan also says the Juke will have the latest technology and “fun to drive” performance.

Renault’s CMF-B platform underpins the new Juke with a variety of engines likely available. Customers should expect fuel sippers such as the 1.0- and 1.3-litre petrol engines. A 1.5-litre diesel should be available, too. There could also be a more potent 1.6-litre turbocharged mill making around 200 bhp, which should be plenty to give the Juke it’s “fun to drive” personality. Front-wheel drive is likely standard with all-wheel drive available as an option.

The 2020 Nissan Juke debuts September 3. Sales should start before the end of the year or in early 2020 at the latest.

PARIS, France (Aug. 19, 2019) – Selling over one million units since its debut appearance in 2010, the new JUKE has been in the final stages of road testing, showing a new look and agile driving performances ahead of its official unveil next month.

Taking to the Millbrook testing track in the UK with a camouflaged exterior, there are elements of the new design left to drivers’ imagination, but the stage is set for its bold return to the B-SUV segment it pioneered almost a decade ago.

Designed in Europe, New JUKE has been an exciting and successful journey in collaboration, bringing together talented Nissan designers across the region to work together on its evolution. The original JUKE model landed with significant impact and captured the imagination of drivers – the next episode is about to begin.

Before the official unveiling in early September, Nissan can reveal:

Having launched and led the B-SUV segment with the first model, the Nissan JUKE will shortly be back with its unique identity, even more character, exciting performances and a leading level of connectivity that responds to drivers’ evolving needs.

Nissan is about to unleash an even bigger personality and exciting driving experience that will appeal to the growing number of drivers opting for the B-SUV segment. Rest assured: while JUKE has grown up in many respects, it will ultimately remain fun to drive.