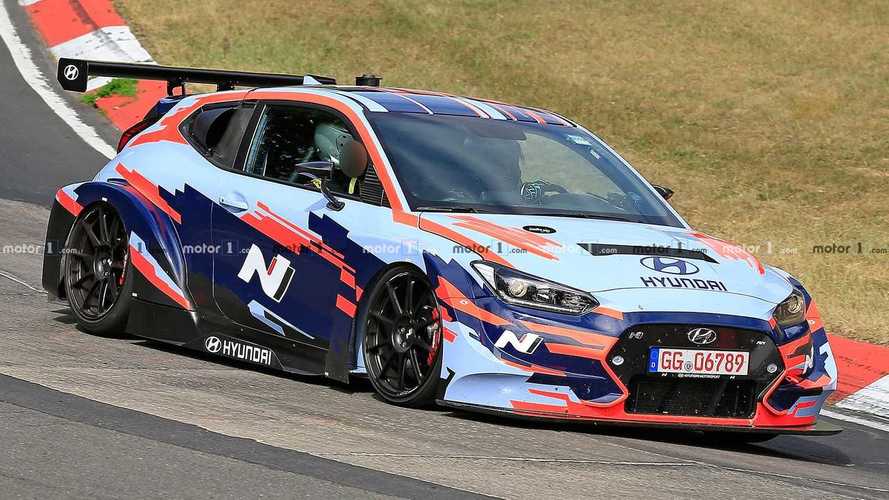 If a Veloster looking like this arrives in showrooms, it would definitely make waves.

The mid-engined Hyundai Veloster has had a secretive development process, but new spy photos have possibly caught it on the road. This beast looks too extreme to hit the street, but the company might surprise us. The car even wears a license plate.

Judging by these pictures, the mid-engined Veloster has a whole lot in common with the Veloster N TCR race car (gallery below). There are some notable differences, though. The potential mid-engined test prototype has a horizontally oriented bonnet vent rather than a pair of smaller ones. Tiny side mirrors sit on stalks emerging from the door panels.

More looks at the mid-engined Veloster:

Look closely at the rear section of the side windows, and notice the vents on each side. They are the best evidence of this test prototype's mid-engined layout. The inlets would channel air to the relocated powerplant. The pieces are also absent from the TCR racer.

Another clue is at the front end where there's a cutout in the bonnet, and inside, a decal displays "Gasoline Only!" This hole likely hides the fuel filler, and having the tank in the engine bay wouldn't make sense unless the powerplant is now sitting behind the driver.

The mid-engined Veloster's development dates back to at least 2016 when we first saw spy shots of it. However, the vehicle in those images looks drastically different from the one in these photos. The model takes inspiration from the RM16 N concept that first imagined a Veloster with this layout in 2016. That version of this idea used a 2.0-litre four-cylinder with an electric supercharger making 295 bhp and 283 pound-feet of torque.

The mid-engined Veloster's future is unclear. These spy shots show that Hyundai is developing the machine, but it's not clear what the company plans to do with the aggressive-looking machine. An obvious answer is to go racing, but then we wouldn't expect the company to be driving the vehicle on public roads like in these photos.