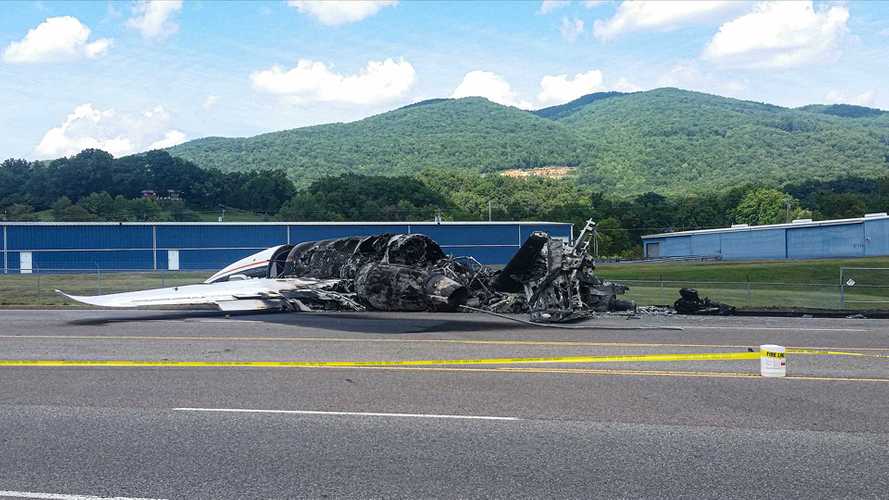 Collapsed landing gear caused the plane carrying Dale Earnhardt Jr. and his family to this weekend’s NASCAR weekend in Bristol to crash off the runway before bursting into flames, the NTSB has revealed.

Nearby CCTV cameras filmed the crash, allowing NTSB investigators to identify that the right-side main landing gear collapsed after the plane made a second or third heavy ‘bounce’ along the runway as it attempted to land.

Senior investigator Ralph Hicks said: “We were able to obtain surveillance footage from buildings around the area that include footage of the accident happening. It shows quite a bit.

“The airplane continued down the runway, off the end through a fence and came to a stop on Highway 91.”

Witness to Dale Jr. plane crash: "There are people in there!"

Hicks added: “We’re going to be on the scene for two or three days, documenting the perishable evidence at the site. Then we’re going to start going into the cockpit, the fuselage and then cutting the airplane up. We will document the flight controls, the engine controls, take a look at all of the systems very methodically.

“The cockpit voice recorder will be sent to Washington for download, [that will occur] probably next week. It did not have a flight data recorder, however there were avionics on board that recorded data that will be useful to us.

“Both pilots were professionally trained, and we’ve spoken to them both today, and their information they provided to us is very consistent with what we have seen in the video.

“The airport itself, the runway is about 1,400-meter long. The airplane was capable of landing at this runway. We were able to walk the runway completely and found the tyre skidmarks that are consistent with this airplane. We recorded those, and we found some pieces of small debris that were along the runway as well.”

A preliminary report about the crash is expected to be ready within seven days.