Alfa Romeo was pretty late to the SUV party when it introduced the midsize Stelvio in 2016, but as the saying goes, better late than never. A smaller crossover represents a top priority for the beloved Italian brand, but it won’t be introduced until 2020 or 2021. To ease the wait, Motor1.com’s weekly rendering attempts to see into the future of the compact model by toning down the concept’s design to make it more suitable for a road-going vehicle.

Taking into account the concept unveiled in March was surprisingly close to what we’d imagine a production-ready Alfa Romeo compact crossover, our rendering is not all that different compared to the Geneva showcar. We decided to retain the rear door handles “hidden” in the C-pillar like on the 147 and Giulietta, but we did change the ones at the front where there are now conventional handles rather than the concept’s flush door handles.

The side cameras have been replaced by regular door mirrors, although we’ll probably be seeing more and more production cars with rearview cameras after the Lexus ES and the Honda E. Up front, the air intakes are smaller than those on the concept, while the sleek headlights have been essentially carried over. Rounding off the changes is the addition of fog lights, unless Alfa Romeo will decide to integrate them in the main clusters to give the Tonale a cleaner design.

Details about the underpinnings remain a mystery months after the concept’s debut, but one plausible scenario is Alfa Romeo will adapt the Jeep Renegade’s Small Wide 4x4 platform also used by the Fiat 500X. Alternatively, the rear-wheel-drive Giorgio platform that underpins the Giulia and Stelvio could be modified for the Tonale, but that would be considerably more expensive to implement. Either way, a plug-in hybrid powertrain has been confirmed by the Italian brand.

With no prototypes caught undergoing testing yet, we have a feeling Alfistis will have to arm themselves with a lot of patience as the production-ready Tonale won’t debut anytime soon. 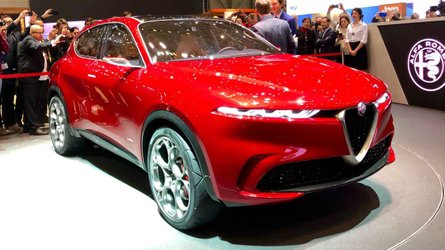