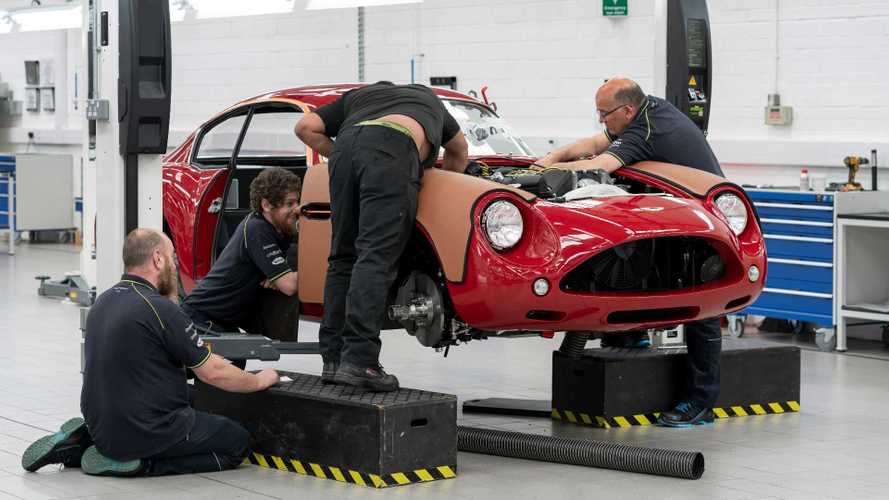 Aston Martin is currently in the midst of reviving its most valuable creating through its continuation programme.

No fewer than 10 DB4 GT Zagatos are currently being put together at the manufacturer's dedicated continuation facility at Aston Martin Works in Newport Pagnell, with 19 in total set to built – one less than the original production run, which itself was cut down from a planned 25 units.

"It’s a privilege for all of us here at Newport Pagnell, as part of the Aston Martin family, to work on these remarkable 'new old' cars," said Paul Spires, president of Aston Martin Works. "The Continuation programme we started here with the DB4 GT Continuation in 2017, that has now spawned the iconic DB4 GT Zagato Continuation, is truly a once-in-a-lifetime opportunity for us to contribute to the rich history of this great British luxury sports car brand."

The cars are meticulously built by hand over 4,500 hours, and make use of a sympathetic application of modern engineering techniques. They're basically identical to the originals, but will probably never fetch anywhere near the record-breaking £10 that a DB4 GT Zagato went for at auction last year.

The original was built to take on the dominant GT racing Ferraris in the 1960s but rarely reached the successful heights of the Italian machines.

"I’m thrilled to see this ambitious Continuation project bear fruit in such an exceptional way. It took courage, vision and incredible dedication for all those involved to take this idea and make it the stunning reality it is today," said Dr Andy Palmer, Aston Martin Lagonda president and group CEO.

"The DB4 GT Zagato is one of the true jewels of Aston Martin’s proud heritage and, paired with the new beauty that is the stunning DBS GT Zagato, the DB4 GT Zagato Continuation cars are a unique and fitting celebration of the brand’s 60-year love affair with this unmatched Italian automotive style icon."

Deliveries of the DB4 GT Zagato Continuation are expected to begin in the final quarter of this year.