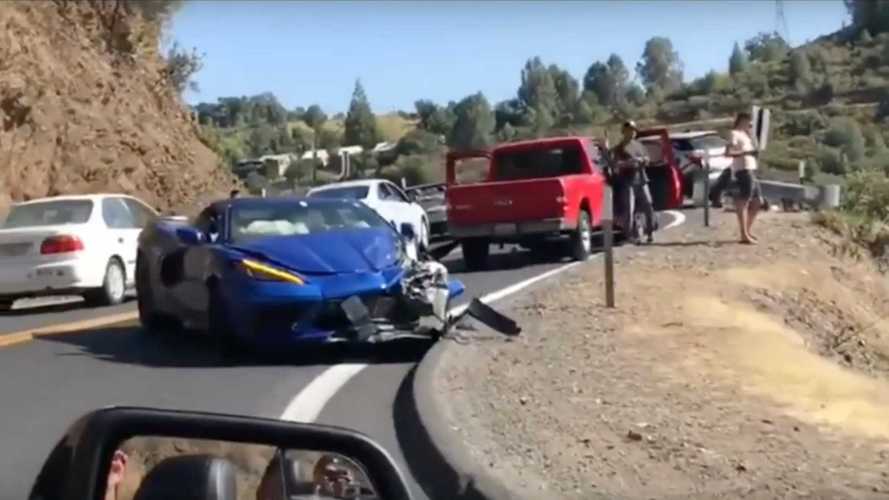 At least, that we know of so far.

Ladies and gentlemen, here is the first ever documented crash of the new Corvette C8; at least that we know of so far. It doesn't look like anyone was seriously injured from all the parties involved, and the airbags of the Corvette did their job. The video was uploaded by a Corvette Nut on YouTube, and it looks like to have taken place towards Yosemite in California USA.

The Corvette in question was part of a caravan of other C8s and a few GM vehicles, and you can see some of the members of the team standing on the side of the road next to the support vehicle. The convoy of Corvettes apparently had GoPros running on all the cars, and the mount can be seen on top of the crashed vehicle, so we're hoping the footage from the action camera can help shed some light. That is, if it ever does get leaked. According to some posts, the Corvette C8 clipped the rear of the white SUV around what looks to be a sharp corner.

There's no shortage of good C8 news to be had:

While details about who are at fault aren't available at the moment, we can somewhat assume that causing a three car accident on a blind corner with the threat of a sheer drop awaiting anyone unlucky enough to go over the edge means that someone was either cutting the corner, or going too fast to begin with. Thankfully, no one seemed to be seriously hurt, and the lack of any emergency services on scene meant that it just happened a few moments ago. Either way, hopefully this serves as a lesson to those who drive beyond their capabilities, and to watch out for other vehicles who may not be as on the ball as you are, especially up in the canyons. Oh, and crash barriers are brilliant.