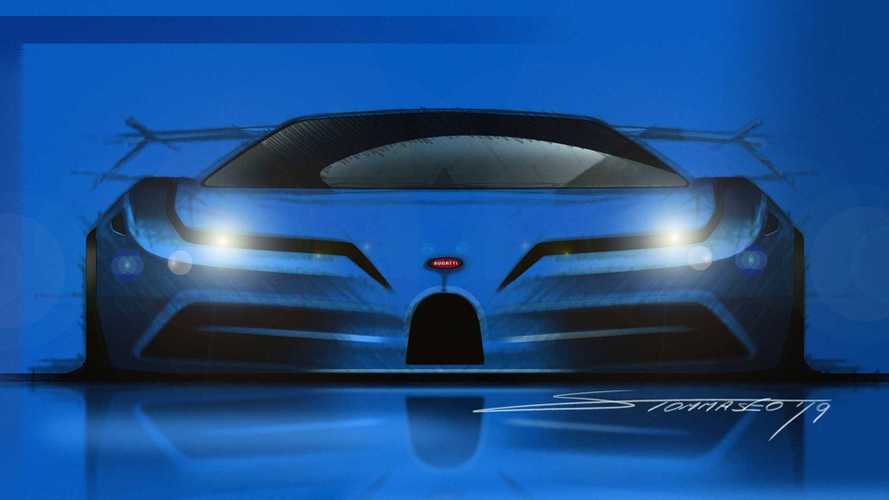 This is the modern Bugatti EB110 that should be.

Last year at the Pebble Beach Concours d'Elegance, Bugatti debuted the Divo – a £4.43-million hypercar limited to just 40 copies. The Divo, essentially a variation of the Chiron, is lighter by a few dozen kilos and features a sharper, more extreme style. Question is, will the French manufacturer have another surprise in store this year? Hard to say, considering there's no official news. But with 110th-anniversary celebrations in full swing, we expect a surprise – and what a surprise this would be.

Unconfirmed rumours hint at a vehicle more exclusive than the Divo. And it would pay homage to one of the most famous Bugattis ever: the EB110. We've already talked about the rumoured model, and even seen unconfirmed leaked images. But now, at the pencil of Salvatore Tommaseo, a Motor1.com reader and design student, we have sketches of what could be.

The primary colour of the concept is blue, as it should be. The snout of this vehicle wears the classic Bugatti grille, but now with more modest dimensions than the Veyron or Chiron, just like to the EB110. The front is more minimal, thanks to the LED headlights that look merely like horizontal cuts in the bodywork. And in the rear, a big fixed-wing – another nod to the iconic EB110.

Of course, it's not up to us to judge the engineering aspect of the sketch. But we can't deny that a front-panel like that has its own charm. This is a flight of fantasy that, of course, doesn't come with technical specifications. Although, it's easy to imagine that this fancy bodywork hides the heart of a Chiron.

The EB110's heir could take advantage of the Chiron's innards, utilising the mighty quad-turbocharged W16 engine, a whopping 1,479 bhp, and all-wheel drive. Even though the original EB110 wielded "just" 12 cylinders arranged in a V. For now, this concept is all just fantasy. On August 16th, when supercars invade Pebble Beach, we'll know if we're right or not.