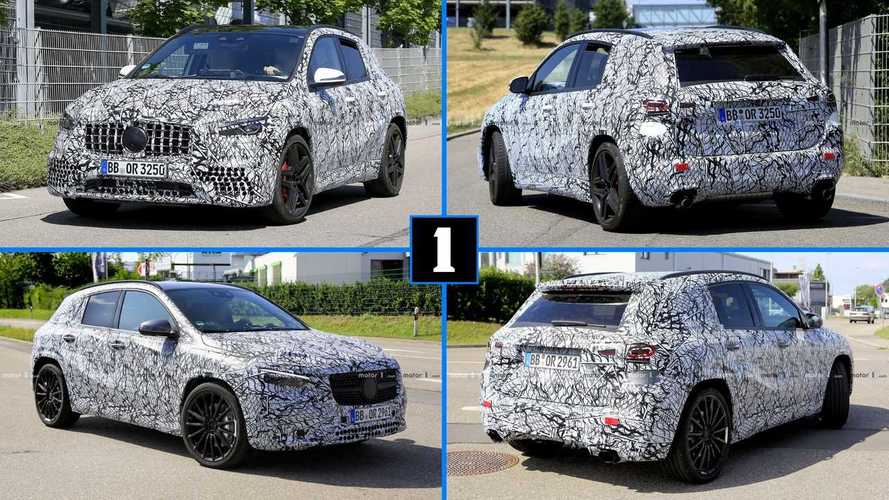 The smallest AMG crossovers will pack 302 bhp and up to 416 bhp, respectively.

Bigger than ever before, Mercedes’ compact car lineup is set to spawn the largest family of small AMGs in the history of the three-pointed star. We’ve already seen the A35, A45 hatchbacks and saloons joined by their swoopy CLA 45 counterparts, but there’s much more to come in the near future. Recent spy shots have revealed the new entry in Mercedes’ compact family, the boxy GLB, will eventually be offered in both AMG 35 and AMG 45 flavours, which is the same thing we can say about the next-generation GLA.

Spotted so far only in lesser trim levels, the baby crossover from Daimler has now been caught by our spies out and about testing in the hotter Affalterbach-tuned iterations. As previously mentioned in articles about the regular 2020 GLA, the next-gen model appears to be featuring a more sophisticated design, and in AMG attire it’s even more desirable.

Regardless if we’re referring to the 35 or 45, the bigger exhaust tips, large wheels, and wider bodies with wheel arch flares denote this isn’t an ordinary GLA. The crossovers have a stiffer suspension setup bringing them closer to the road, while the meaner of the two GLAs is hiding its “45”-reserved grille with the vertical slats akin to the Panamericana-style grille.

While we don’t get to see what’s going on inside the cabins of the two prototypes, a quick look at an existing “35 or “45” AMG car will reveal a great deal of what to expect from the new performance-oriented GLAs. We’re expecting the interiors to be almost identical to what you get in an A35 hatch or a CLA45, with some discreet changes to make them a little bit distinguishable.

Both the GLA 35 and GLA 45 will rely on a turbocharged 2.0-litre petrol engine, with 302 bhp for the former and 382 bhp for the latter. There’s probably going to be a GLA 45 S with 416 bhp and 369 lb-ft of torque to serve as the range topper. All versions are going to come as standard with all-wheel drive and a dual-clutch automatic transmission, but the “45” cars are going to boast eight gears or one more than the “35” models. It remains to be seen whether the drift mode will be offered on the small crossover, although we don’t see a reason why it shouldn’t.

It will be a while before the GLA 35 and GLA 45 / 45 S will be revealed taking into account we haven’t even seen the standard model yet. Our money is on an official premiere of the AMGs at some point in 2020 and a market launch as 2021MY cars.

The regular GLA will be out first: