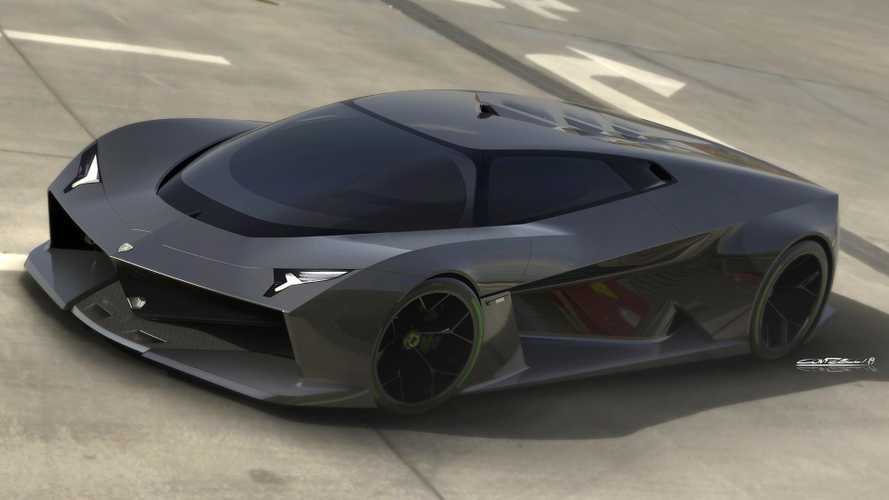 There are some huge inlets for routing air around the body.

Conticelli's design puts an emphasis on aerodynamics. There are two huge inlets in the front end that channel air past the front axle and then along the side of the body. Smaller openings in the rear corners would presumably also route this flow for cooling the engine.

While eye-catching, the big openings would also slice considerably into the passenger space. Judging from the renderings, the driver might need to sit in the centre of the cockpit to have enough space for the steering wheel and pedals. Staggered seating positions akin for the McLaren F1 could provide room for a passenger.

The latest from Lamborghini:

Fake Ferrari and Lamborghini workshop shut down by police

Motor1.com recently has an opportunity to discuss Lambo's future with chief commercial officer Federico Foschini. There are some new vehicles on the way, but the company doesn't intend to move beyond a three-model lineup too soon. A successor to the Aventador is reportedly coming with a hybrid-assisted version of the brand's existing V12 and running through a dual-clutch gearbox. The current timeframe suggests the model could debut as soon as 2020 or possibly as late as 2022.

The company is also working on a hotter version of the Urus SUV. Specific details about the vehicle remain a mystery, but expect the output to jump beyond the current 641 bhp. The variant might debut in late 2019 or could arrive in 2020.