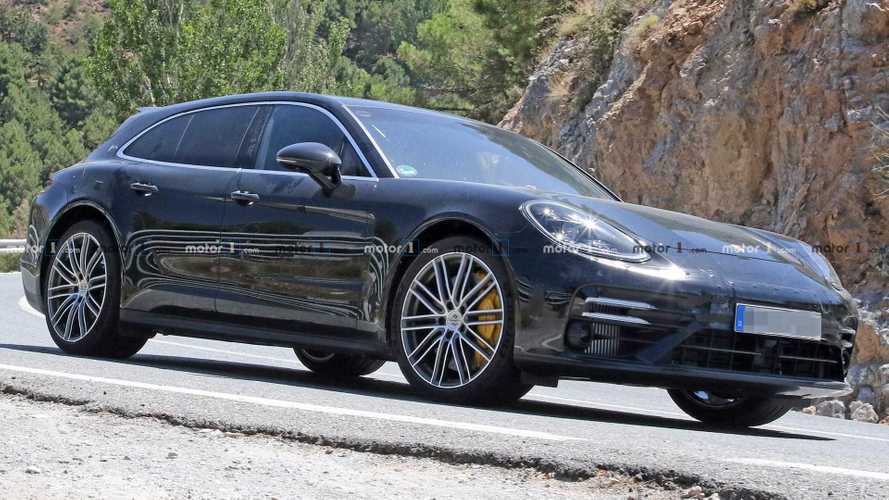 It doesn't look like Porsche intends to change much about the Panamera's styling.

Spy shots once again catch the refreshed Porsche Panamera Sport Turismo under development. Unlike the previous car that was red, the brand used its standard black concealment this time.

The front end of this Panamera Sport Turismo has black tape across the front bumper. The overall design looks almost the same as the current model, except that the openings above the driving lamps are smaller on this vehicle. Instead of a double strip of slats through the lower fascia, this one only uses a single horizontal piece.

The modifications are more noticeable at the rear where Porsche tries to hide the revised taillights. The coverings along the bottom suggest the lamps would cut even farther into the rear hatch. The circular exhaust outlets indicate this is a lower trim of the Sport Turismo because the speedier Turbo variant gets trapezoidal exits for the pipes.

There are no photos yet of the interior, but minor tweaks are likely. Expect the cabin to have different trim. The company might take the opportunity to update the infotainment software, too.

Powertrain changes are also possible but would probably be revised tuning for an improved output from the engines. Don't expect many major alterations under the bonnet.

In addition to this refresh, there are rumours once again that Porsche is considering whether to use the Panamera's platform to create more variants of the model. The alleged possibilities include a coupe that would be a spiritual successor to the 928. A convertible is also among the speculation as a way for the company to offer a larger droptop option.

The timeframe for these changes to debut is currently a mystery. The tweaks appear fairly minor, so it's possible that an unveiling could happen before the end of the year. Don't expect sales to start until 2020, though.