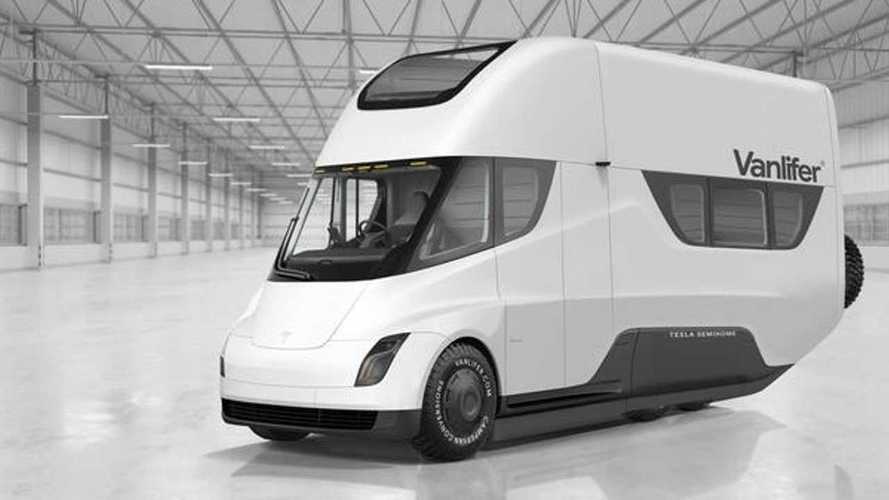 The Semi-Home is certainly the motorhome of the future.

Check out this Tesla Semi-Home. It's a rendered camper/motorhome version of the Tesla Semi and it drives itself, so perhaps you could sleep as it takes you across the country.

This isn't the first motorhome render to surface with the Tesla Semi as the starting point and it certainly won't be the last. However, this one has a more realistic overall appearance than the ones we've seen before.

This particular render comes to us via Vanlifer. The company specialises in camper van conversions and this is its first take at making a motorhome out of a Tesla. Vanlifer states:

The motorhome build would fit onto the back of the Tesla Semi so you would only need minimal modification the chassis, but just add the composite structure onto the back.

Our concept Tesla Semi-Home is a six-berth with a full kitchen, living space, toilet and all the other luxuries of high-end motorhomes and RVs.

Though quite tall, this motorhome also appears to be rather short. However, there's plenty of room on the inside and all of the expected amenities (kitchen, bath, beds and more) are within. The Tesla Semi with enhanced autopilot and a range of up to 500 miles on a single charge is very exciting - here at Vanlifer, we see it as the future of electric motorhomes, campervans and RVs.

We’ve designed a concept motorhome build which would be built onto the back of the Tesla Semi - Tesla’s class 8 electric truck. The Tesla Semi could make the world’s first long-range all-electric motorhome or RV

But really the main benefit of this motorhome is its self-driving capability. Could you imagine travelling from campsite to campsite (or attraction to attraction) throughout the U.S. while sleeping the hours away in one of the beds? That might be a few years away still, but if full self-driving becomes reality, then this motorhome will be the one that everyone wants.