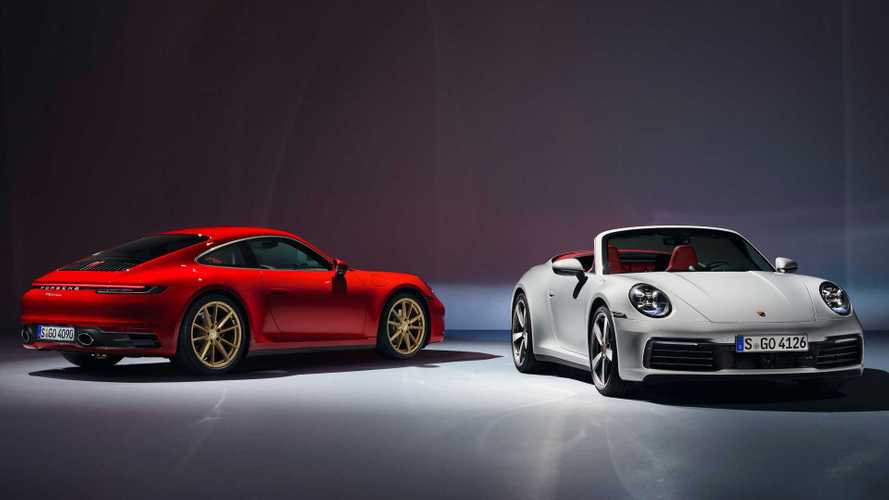 See if you can spot what makes them look different from the more powerful Carrera S versions.

Eight months after the debut of the 2020 Porsche 911 Carrera S, the German brand now unveils the standard 911 Carrera and Carrera Cabriolet ahead of deliveries beginning in early 2020. They pack a 3.0-litre, twin-turbo flat-six engine making 380 bhp and 331 pound-feet of torque that routes through an eight-speed dual-clutch gearbox. That's 15 bhp more than its predecessor. For comparison, the more potent S variant offers 444 bhp and 390 lb-ft of torque.

The lower amount of power doesn't take much away from the 911 Carrera's performance. The hardtop requires 4.2 seconds to reach 62 mph with a top speed of 182 mph. Adding the optional Sport Chrono Package takes the figure down to 4.0 seconds. To put the figures up against the rear-drive Carrera S, the more potent model requires 3.7 seconds to hit 62 mph or 3.5 seconds with the Sport Chrono Package.

Aesthetically, it'll be very hard to tell the standard Carrera apart from the Carrera S. The only difference is that the Carrera has a single exhaust outlet exiting from each corner of the rear, versus a pair of pipes on each side of the S. However, buyers can spec an optional Sport Exhaust with two oval tips. The interiors are also identical, including both models using a 10.9-inch infotainment screen.

The new Carrera models come standard with lots of tech. The features include Porsche Active Suspension Management adaptive dampers with Normal and Sport modes. The brakes have a Wet mode that detects a wet road and tweaks the stability control and anti-lock brake system for the conditions.

The options list includes features the Porsche Ceramic Composite Brakes and staggered 20- and 21-inch wheels that come straight off the Carrera S.

Prices for the 911 Carrera start at £82,793.00 RRP and the 911 Carrera Cabriolet goes for £92,438.00 RRP. To put those numbers in perspective, a base rear-drive, hardtop Carrera S would set you back £93,110 RRP and the Carrera S Cabriolet goes for £98,418 RRP. The new models can be ordered now at Porsche Centres in the UK and Ireland. The all-wheel drive version will be available soon.