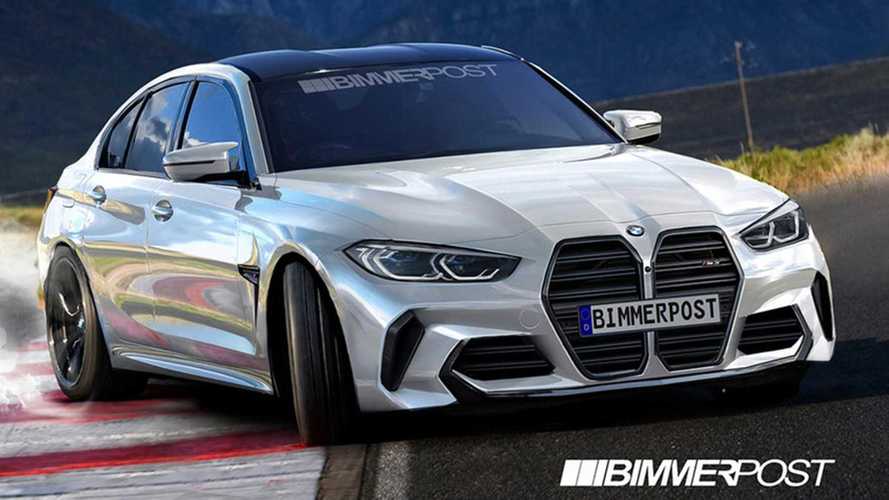 Let's keep our fingers crossed that the grille isn't this big.

The G80-generation BMW M3 will allegedly arrive in the United Kingdom next year for the 2021 model year, but the folks at Bimmerpost won't wait that long to see the new saloon. An artist there, who goes by the username Mii, now uses spy photos to imagine how the upcoming vehicle might look when the camouflage comes off. If his design cues are correct, then the next-gen M3's appearance could be polarising. You can check out the renderings in other colours at Bimmerpost.

The most visually arresting element of this design is the massive grille that appears even larger than the ones on the refreshed 7 Series and X7 crossover. To make the giant openings work, the rendering artist sculpts raised sections into the top of the grille. However, the openings are comically oversized and don't match the generally subdued styling from the rest of the vehicle.

Subtly flared wings are also evident in this render. While not visible here, spy photos indicate that there are two sets of dual exhausts at the back.

Even if the new M3 turns out not to be very pretty, don't underestimate its performance. Current speculation suggests that the new M3 and M4 get a 3.0-litre twin-turbo inline-six engine making 473 bhp in standard guise. There would also be a hotter Competition version allegedly producing 503 bhp.

The drivetrain handling this engine is allegedly the choice of a seven-speed dual-clutch transmission or a manual gearbox. There are also rumours of all-wheel drive being an option, instead of the rear-drive layout from every previous generation of the M3.