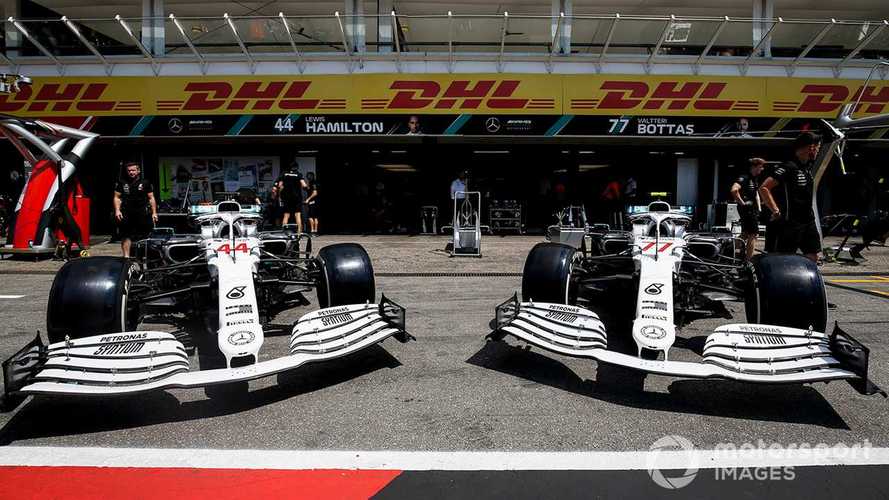 The Mercedes Formula 1 team's "125 years of motorsport" livery has been revealed ahead of this weekend's German Grand Prix at Hockenheim.

The commemorative design that Mercedes will run to honour the 125th anniversary of the 1894 Paris to Rouen event, which is widely considered to be the world's first motor race, is a significant departure from the team's standard livery.

The front wing and the front of the chassis will be matte white, the colour Mercedes-Benz's original grand prix cars were traditionally painted in, in Hockenheim.

The area around the cockpit, the car's halo, and the airbox all feature white patches that interrupt the colours of Mercedes and title sponsor Petronas, to give the impression the top layer of paint has been removed to reveal the livery in which the W10 normally runs.

This is to acknowledge the process through which Mercedes is alleged to have first used its 'Silver Arrows' scheme, when the white paint on the manufacturer's W25 car was scraped off to meet the 750kg weight limit before its first race in 1934.

In its pre-German Grand Prix preview, Mercedes said: "Without the white paint, the metal bodywork of the car was exposed, giving it a silver look: the first Silver Arrow was born."

Mercedes is also celebrating its 200th grand prix start as a works team this weekend at its home race, of which it is also the title sponsor.