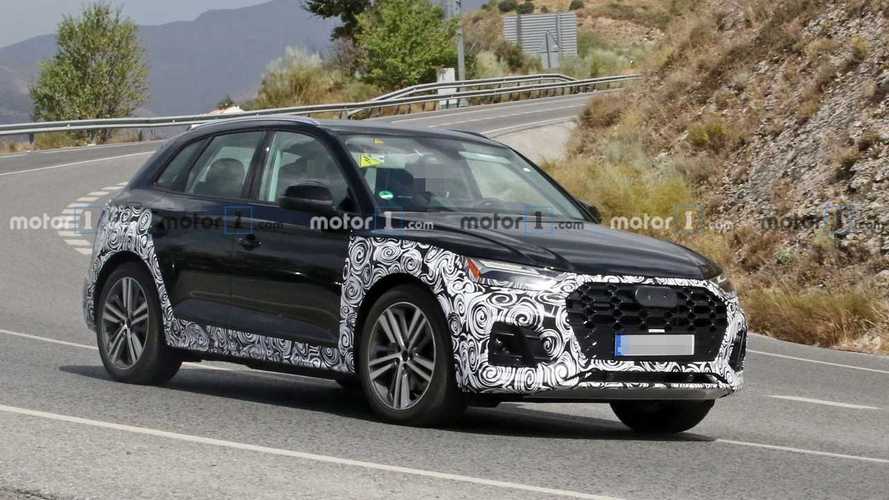 The changes appear minor, and likely won't arrive until the 2021 model year.

If it seems like you’ve seen lots of Audi spy photos lately, it’s because you have. In just the last two days we’ve caught the new S3 seloon and RS Q3 Sportback. Go back a couple of weeks and we see facelifts for the RS Q8 and the RS5 Sportback, not to mention the S3 Sportback in full camouflage wrap. Now, we have our first look at the facelifted Q5, because things move very fast in the crossover/SUV world.

Tis the season for facelifts:

How fast are we talking? The current Q5 recently debuted for the 2018 model year, but Audi clearly has some minor updates front and rear to keep its people mover competitive. Up front, we can see the Q5 will get a revised grille similar to other recent Audi makeovers. It’s still massive, but it’s wider-and-shorter proportions make it look ever-so-slightly smaller. We can clearly see new headlights are also coming as well, along with a revamped fascia to make it all fit together.

We see new lights at the back, too. The Q5’s liftgate doesn’t appear to differ from the current model despite wearing full camo coverings, but details like a full-width chrome strip connecting the taillights could exist. Similarly, we can’t see anything obvious on the lower fascia, but some new trim details are certainly possible. That holds true for camo wrap on the sides, though we suspect it’s just there to throw us off the scent.

We have no word on what changes could take place inside or under the bonnet. We just got a new Q5 plug-in hybrid earlier in 2019, so most powertrain options will likely carry over with little-to-no change in power. Since this is still a relatively new SUV, we expect changes within the greenhouse to be similarly subtle, with colours and tech upgrades being the extent of the updates.

With the current Q5 less than two years old, this facelifted version probably won’t debut until next year at the earliest as a 2021 model. Then again, there’s always the chance that Audi could surprise us with something sooner.