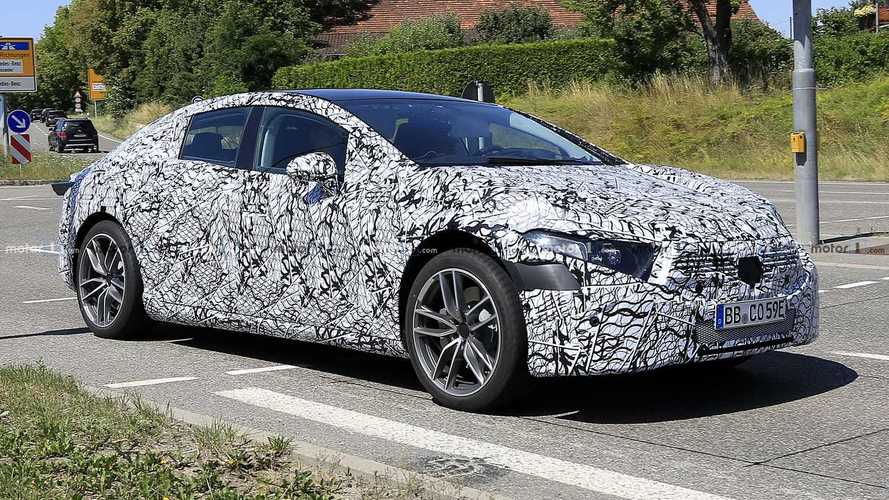 The rumours were true – Mercedes is indeed planning a range-topping EV that will likely go by the EQS moniker once it will be launched early next decade. Spotted up close and personal by our spies, the heavily camouflaged prototype was trying to hide its dramatic shape underneath the disguise, but it’s pretty obvious we’re dealing with something quite special. With a low roofline and a swoopy shape – this isn’t your typical Mercedes as it looks sleeker even than two of the company’s most attractive cars, the CLS and the AMG GT Four-Door Coupe.

It might have a few things in common with the next-generation S-Class (W223), but it seems it’ll eschew the traditional saloon body style for a more practical five-door liftback judging by the prototype’s derrière. Speaking of the rear end, those oval cutouts in the camo at the rear bumper might suggest the car had exhausts, therefore a combustion engine, but our spies are confident we’re dealing with a pure electric vehicle.

The basic taillights that stick out like a sore thumb are obviously temporary clusters used only during the early testing phase as the real ones are either missing or hiding beneath the camo. Like we said before, it appears to have a hatchback opening rather than the boot lid of a typical S-Class, which should improve practicality in the cargo compartment.

Moving at the side profile, the car’s shape somewhat reminds us of the radically styled 2015 IAA concept pictured below. Notice anything unusual? The door handles don’t stick out from the body, and that’s because the EQS (name not confirmed) will be getting pop-out handles like the next-gen S-Class. Both rear quarter panels appear to have a cap for refuelling, which would indicate the test vehicle is a plug-in hybrid, but we have a feeling one of them is simply there just to throw us off.

Up front, the EQS might’ve had the final headlights or at least that’s the shape we should see on the production car. What looks to be like a closed-off grille points towards an EV that doesn’t need to cool off a combustion engine like a conventionally powered vehicle. There’s some thick camo on the bonnet and in other places, but the car itself looks like it has the production body.

The Mercedes EQS is expected to ride on a dedicated electric vehicle platform known as “MEA” from “Modular Electric Architecture.” Aluminium-intensive, the hardware will accommodate a flat floor structure to maximise the amount of space available inside. Power will reportedly come from dual electric motors – one on the front axle and the other at the rear – to enable an all-wheel-drive layout. We’re expecting more power compared to the EQC, which offers 402 bhp and 564 lb-ft.

Inside, just about everything remains hidden under pieces of black fabric. Perhaps we will get an idea about the EQS’ cabin once the revamped S-Class will debut at some point next year. Considering the positioning of the two models, we’re expecting nothing but the best in terms of technology and materials. After all, the car will have to face some fierce competition coming not just from the Tesla Model S, but also the upcoming Porsche Taycan and Audi E-Tron GT. An all-electric Jaguar XJ has also been confirmed, so the battle is heating up in the high-end EV segment.