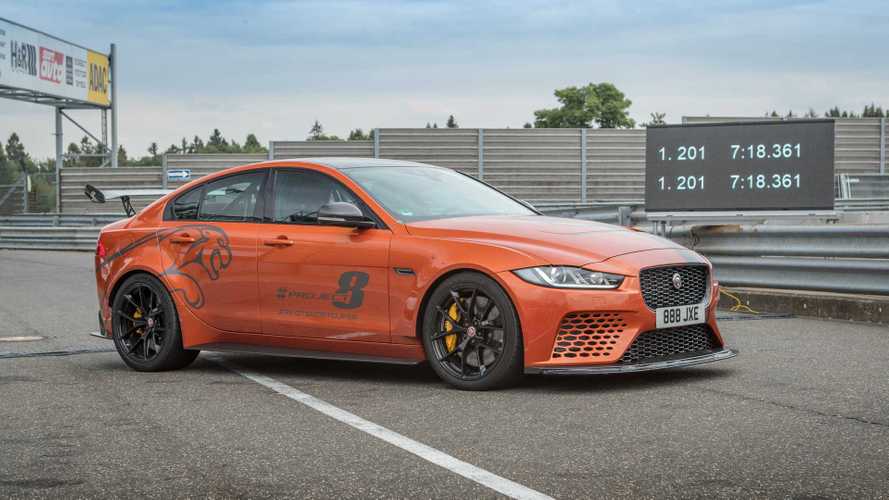 The Jaguar XE SV Project 8 is the holder of a number of lap records all over the world, and now it's claimed another... from itself.

That's right, Jaguar's super mad saloon has beaten it's own four-door saloon lap record at the Nürburgring Nordschleife by lapping the 12.8 mile track in 7min 18.361sec – 2.9 seconds quicker than before.

More on the Project 8

"The original Nürburgring time set by Jaguar XE SV Project 8 demonstrated the extreme performance envelope of the world’s fastest production sedan, but the SV team is driven by a motorsport mentality and we knew Project 8 could go even faster," said Jamal Hameedi, Engineering Director for Jaguar Special Vehicle Operations. "This new official record time is a fitting reward for everyone who has played a part in pushing the boundaries for our customers with Project 8."

The Project 8 was developed by Jaguar Land Rover's Special Vehicles operations division, and while it is based on the standard XE's lightweight aluminium-intensive monocoque, it is anything but normal. Just 300 will be made, all hand built at JLR's SV Technical Centre in Coventry, and have specially been modified to accommodate Jaguar's 5.0-litre V8 engine and a bespoke rear differential.

It is the quickest, most powerful road-legal car ever made by Jaguar. Powered by a fire-breathing 592 bhp supercharged V8, it can launch from 0-60 mph in a supercar-like 3.3 sec and go on to a (limited) top speed of 200 mph.