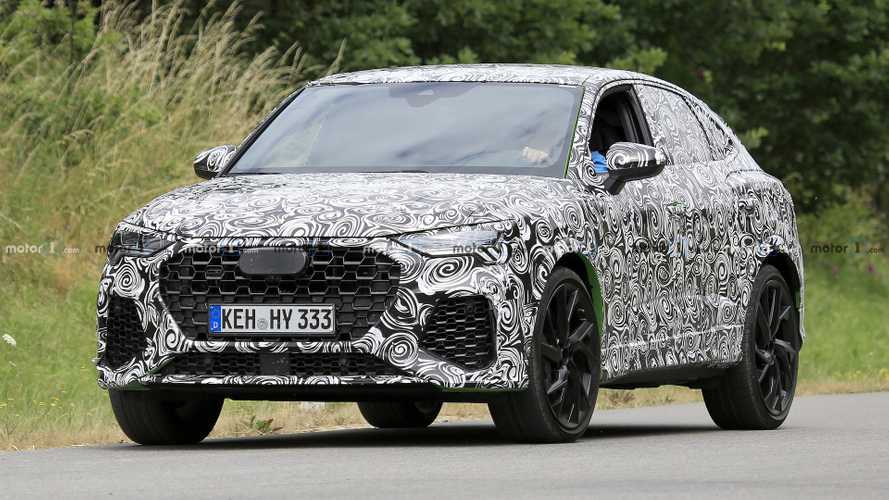 Look closer at the wheel arches and you'll see the prototype's real paint is Lime Green.

Luxury brands have been the promoters of SUV diversification in the last decade, and Audi is a prime example of how an automaker’s lineup has greatly expanded to include multiple high-riding models. Gone are the days when the Q7 was Audi’s only vehicle of this hugely popular type as now the folks from Ingolstadt have everything from a pint-sized Q2 to a flashy Q8 coupe-ified SUV.

Speaking of SUVs beaten with the coupe stick, a new one is on the horizon. Audi has been testing the Q3 Sportback for quite some time, so an official reveal is likely around the corner. In addition, spy shots have shown an RS version is also in the pipeline to spice things up a bit, and these new images reconfirm Audi Sport’s desire to build a five-cylinder Q3.

Set to be the most expensive model of the Q3 lineup, the RS-badged Sportback has been caught hiding its Lime Green paint underneath the typical swirly camouflage. There are lots of clues hinting at the car’s identity, from the massive air intakes up front to the oval exhaust tips at the back. Those massive wheels with chunky brakes also denote it’s the amped-up Q3 Sportback, much like what looks to be a stiff suspension setup.

The more stylish version of the Q3 will reportedly be slightly longer than the regular model while likely losing some of the rear headroom due to the heavily sloped roofline. The cargo capacity is also expected to take a hit because of the body’s swoopy shape, but that’s the price to pay for having something a bit more special than the normal Q3.

We’re not expecting anything particularly exciting with the interior since the cabin of the Q3 Sportback will likely be largely inherited from the standard SUV. Of course, with this being the RS version, expect some subtle upgrades here and there in typical Audi Sport fashion.

At the heart of the Audi RS Q3 Sportback will probably be the glorious five-cylinder 2.5-litre turbocharged engine with somewhere in the region of 400 bhp. Like all of the other models from Audi Sport – except for the R8 RWS – it will come as standard with Quattro all-wheel drive. We wouldn’t hold our breath for a manual gearbox since logic tells us the sporty crossover will come in an automatic-only flavour.

Audi has confirmed the Q3 Sportback for a reveal this July, so look for the RS model to debut in the months to come.