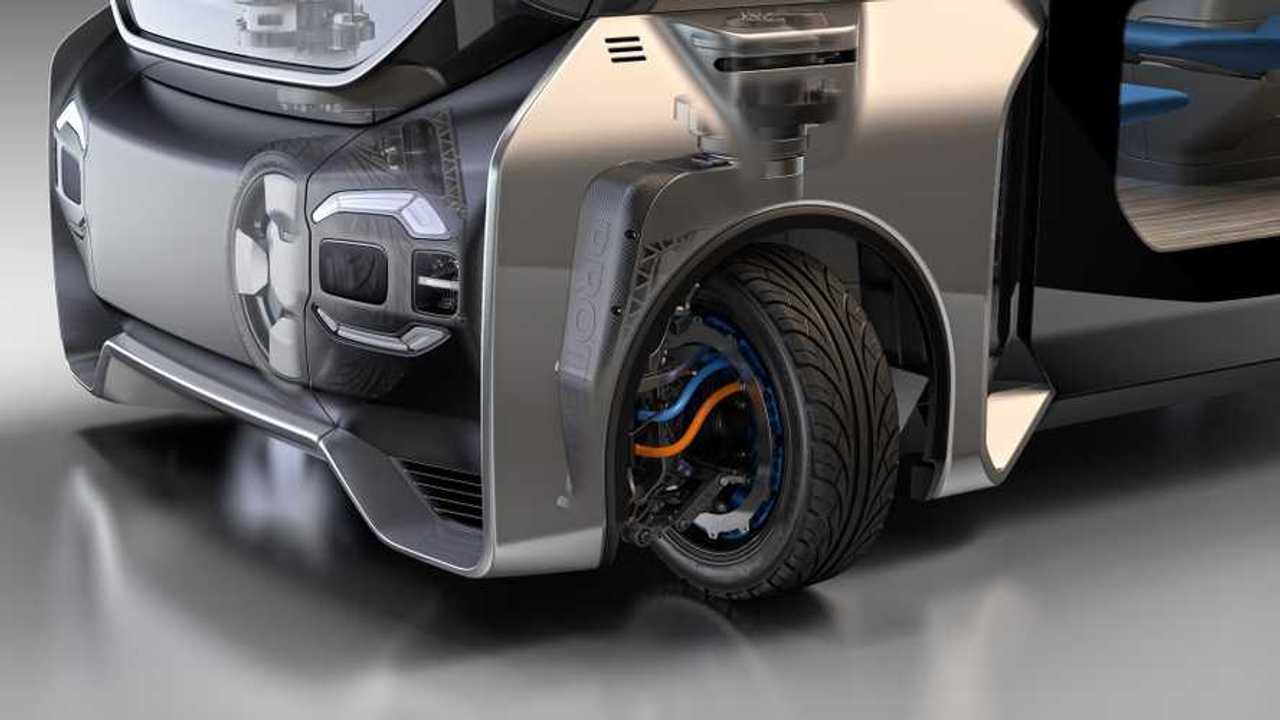 The cars of the future could be super-manoeuvrable thanks to a 360-degree steering system revealed in a new concept mobility pods.

Developed by Farnham-based Protean Electric, the so-called ‘corner module’ incorporates a wheel, steering and electric motor, and allows the wheel to turn through 360 degrees, making cars much more manoeuvrable. Because the modules can point in any direction and provide power, it could enable cars to move in any direction, making it possible to park or turn in tighter spaces.

And Protean Electric also claims that it’s in-wheel motors are more efficient than alternatives, because there are fewer losses in the driveline. And the firm says the in-wheel system improves performance, too, with changes in motor torque delivery arriving at the wheels much more rapidly. The result, Protean says, is a seven-percent reduction in stopping distances, as well as improved stability and ABS system performance.

Furthermore, the modules are designed to be compact, taking up the minimum space possible and leaving the vehicle’s body free to carry passengers or luggage. That has been achieved through the use of a multi-link suspension design with a ‘spider’ movement, which allows the suspension to operate similarly no matter which way the vehicle is travelling.

To demonstrate the potential of the corner modules, Protean has showcased the technology in concept “urban mobility pods”, which combine the modules with autonomous technology. Shaped like small buses, Protean says the modules make vehicles more capable than conventional cars when manoeuvring around obstacles or through busy urban traffic.

As well as clever wheels, the vehicles are also fitted with a pneumatic ride height adjustment system that allows them to ‘kneel’. Similar systems are already used on buses, which can be lowered to make access easier, but Protean’s offering is designed to offer “stepless kerb-to-vehicle access”, improving accessibility for wheelchair users or those with restricted mobility.

According to the company’s CEO, KY Chan, the corner module technology is already attracting interest from firms wanting to use it in future vehicles.

“Transport-as-a-Service urban mobility is gaining momentum, and with it the need for a new class of urban transport vehicles,” he said. “Whether shared or private, for passengers or goods deliveries, human-driven or autonomous, these new vehicles will require new technologies to be fit for purpose. The Protean360+ corner module was borne from our team’s innovative thinking about how to meet the requirements for these next-generation urban vehicles.”

“The Protean360+ corner module intelligently combines cutting-edge, production-ready technologies. Its unrivalled capabilities significantly advance the effectiveness of the urban transport vehicle concept, and we are already in discussion with prospective customers wishing to apply the corner module in their future vehicles.”